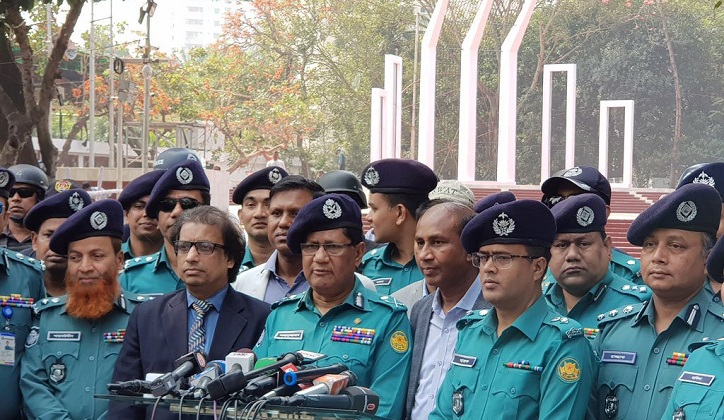 Four-tier security arrangement would be installed at every entrance of Shaheed Minar to ensure highest security and discipline on February 21 to mark the Language Martyrs Day and International Mother Language Day.

He said around 16,000 police personnel will be deployed across the capital city and metal detectors and surveillance cameras will be placed at every key points on February 21.

"Of them, 6, 000 will be working to ensure safety around the Central Shaheed Minar," he said adding "There's no fear of militant attack.”

He said hawkers and makeshift shops would be removed from the area to ensure easy movement of people.

Between 6pm Wednesday and Thursday, only authorised vehicles, and students and teachers of Dhaka University would be allowed to enter the campus, the DMP chief said.

People with bags, knives, scissors or inflammable objects will not be allowed to enter Shaheed Minar premises.

It will be open for all after President Abdul Hamid, Prime Minister Sheikh Hasina, foreign nationals and VIPs pay homage to the martyred heroes on Wednesday night, he said.

All visitors will have to use Polashi road for coming to Shaheed Minar and Doel Chattor and Chankharpul roads for getting out.