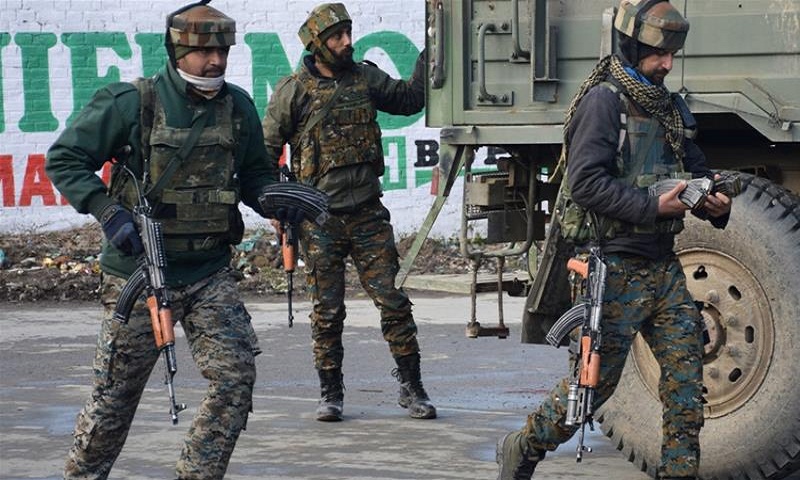 Nine people, including four Indian soldiers and a policeman, have been killed in Indian-administered Kashmir during a gun battle, police say.

The clash occurred in Pulwama, where more than 40 Indian paramilitary police were killed in a bombing last week.

That attack, the worst in decades, has fuelled tensions between nuclear-armed India and Pakistan.

A civilian and three alleged militants were also among those killed in Monday's confrontation.

Police say the three suspected militants who were killed are members of Pakistan-based group Jaish-e-Mohammad (JeM), which said it was responsible for Thursday's suicide bombing.

Pakistan denies any role in the bombing, but India has accused the state of being complicit.

India recalled its top diplomat to the country in the wake of the attack and Pakistan has now also recalled its ambassador from Delhi for consultations.

The operation lasted 16 hours on Monday, with heavy gunfire reported as Indian security personnel appealed to villagers to stay indoors.

Among the Indian soldiers killed was an army major, police and military officials said. They said another six members of the Indian military were also injured in the battle.

The operation targeted a residential area said to be a hideout for suspected militants.

The suicide bomber was identified as a local Kashmiri aged between 19 and 21.

More than 20 people were detained on Sunday, according to police.

How high are tensions?

Kashmir has been a flashpoint between India and Pakistan since independence.

Both countries claim all of Muslim-majority Kashmir but control only parts of it. They have fought two wars and a limited conflict in the region.