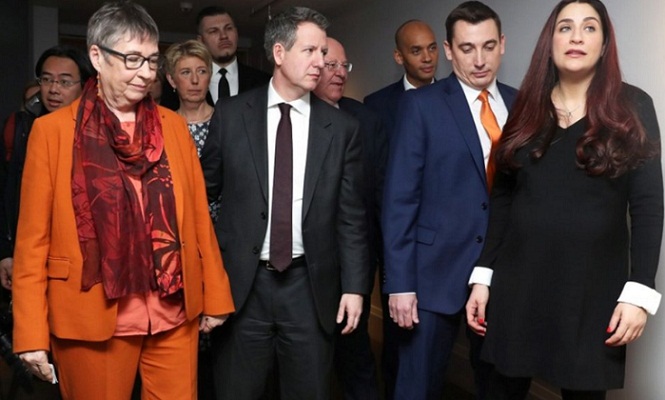 Seven MPs have resigned from the Labour Party in protest at Jeremy Corbyn's approach to Brexit and anti-Semitism.

Luciana Berger said Labour had become institutionally anti-Semitic and she was "embarrassed and ashamed" to stay.

Corbyn said he was "disappointed" the MPs had felt unable to continue working for the policies that "inspired millions" at the 2017 election.

Shadow Chancellor John McDonnell said the "honourable thing for them to do" would be to stand down and fight by-elections.

He said Labour was "a family", adding: "We shouldn't splinter in this way.

"It is better to remain in the party, fight your corner."

Who are the Labour MPs resigning?

The MPs, who all back a further EU referendum, are not launching a new political party- they will sit in Parliament as the Independent Group.

But Chuka Umunna said they had "taken the first step" and urged other Labour MPs - and members of other parties - to join them in "building a new politics".

"It is time we dumped this country's old-fashioned politics and created an alternative that does justice to who we are today and gives this country a politics fit for the here and now - the 21st Century," he said at a launch event in central London.

He said there would be "no merger" with the Liberal Democrats, who have 11 MPs, and the group wanted to "build a new alternative".

Chris Leslie said the seven would have their first formal meeting "in a few days" time to "assign roles and responsibilities".

The group rejected comparisons with the SDP - which broke away from the Labour Party in the early 1980s but eventually merged with the Liberal Party - saying it was a different era and they would not be contesting by-elections.

In a founding statement on its website, the group sets out its approach to the economy, public services and security, as well as Brexit, saying its aim was to "pursue policies that are evidence-based, rather than led by ideology".

After months of debate behind closed doors, seven Labour MPs have gone - each with their own tipping point. For Luciana Berger, anti-Semitism, bullying and intimidation was central; for Chris Leslie "Brexit was the tipping point".

It was clearly a painful decision for Mike Gapes - emotion etched on his face.

Defections to the Independent Group are likely to increase - but it will need to attract some of those beyond Labour to become a proper "centre party".

Two more MPs were undecided about whether to be at the launch, one of them was 90% but clearly not 100% there.

And more still may be persuaded to go unless they see a more robust response to anti-Semitism.

But what's interesting is who wasn't, as well as who was, on stage.

Strong supporters of the Blair/Brown governments such as Peter Kyle and Ben Bradshaw are staying to fight their corner on Brexit and it's likely in the short term the numbers who do go will be small.

This is no simple centrists v left, or indeed, ultra left split.

However, the reaction of left-wing activists to today's drama could be crucial.

If they feel fired up to de-select those who share the politics of the defectors but who have no intention of leaving Labour, the splinter could yet become a more sizeable split.

Each of the seven took turns to explain their personal reasons for quitting the party.

Luciana Berger said: "I am leaving behind a culture of bullying, bigotry and intimidation. I look forward to a future serving with colleagues who respect each other."

Chris Leslie said Labour under Corbyn had been "hijacked by the machine politics of the hard left".

Mike Gapes said: "I am sickened that Labour is now perceived by many as a racist, anti-Semitic party."

He added that it was "increasingly clear that prominent figures in the Corbyn Labour leadership do not want to stop Brexit".

Luciana Berger initially introduced herself as "the Labour Party MP", before correcting herself and saying: "I am the Member of Parliament for Liverpool Wavertree."

In a statement, Corbyn said: "I am disappointed that these MPs have felt unable to continue to work together for the Labour policies that inspired millions at the last election and saw us increase our vote by the largest share since 1945.

"Labour won people over on a programme for the many not the few - redistributing wealth and power, taking vital resources into public ownership, investing in every region and nation, and tackling climate change.

"The Conservative government is bungling Brexit, while Labour has set out a unifying and credible plan."

Laura Parker, national coordinator of grassroots Labour campaign Momentum, said the seven MPs wanted to "take us back to the politics of the past" and the "Blair years programme of privatisation, tax cuts for the rich and deregulation of the banks".

"They offer no concrete solutions, no new ideas and have no support amongst the public," she added.

Senior Labour figures, including former leader Ed Miliband and London Mayor Sadiq Khan, expressed their dismay at the split, with Khan saying on Facebook that the seven MPs were friends of his but he would not be joining their new group and it was a "desperately sad day".

Pro-Brexit Labour MP Graham Stringer accused the seven defectors of being "dishonest" about their motives, telling BBC News it had been "clear for some time" that "their agenda is not to change Labour Party policy" but to "set up a new party and leave".

Liberal Democrat leader Sir Vince Cable said the split was "not unexpected, or unwelcome" and his party was open to "working with like-minded groups and individuals in order to give the people the final say on Brexit, with the option to remain in the EU".

Conservative Party Chairman Brandon Lewis said the resignations had confirmed that Labour "has become the Jeremy Corbyn Party - failing to take action on everything from tackling anti-Jewish racism to keeping our country safe".

Former UKIP leader Nigel Farage, whose new Brexit Party launched earlier this year, tweeted: "This moment may not look very exciting but it is the beginning of something bigger in British politics - realignment."