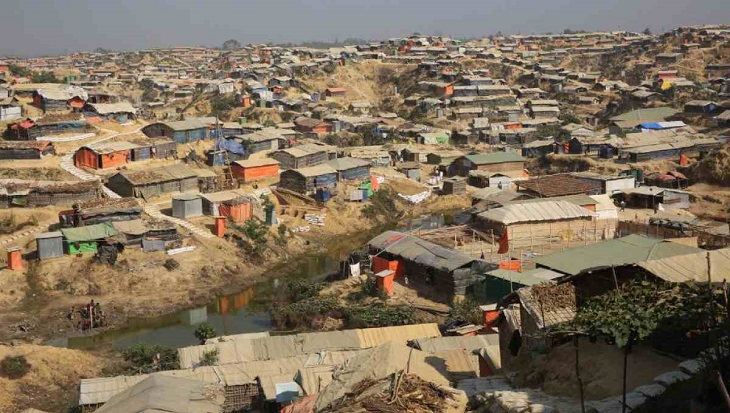 International Federation of Red Cross and Red Crescent Societies (IFRC) has said an estimated 574,000 people in Cox's Bazar Rohingya will face the coming cyclone seasons with only rotting bamboo and shredding plastic to protect them.

A Red Cross Red Crescent survey found that 82 per cent of the 700,000 people in sprawling camps urgently need sturdier shelters to protect them from extreme temperatures, monsoon downpours and two cyclone seasons a year, according to a media release issued both from Cox's Bazar and Kuala Lumpur on Monday.

It is almost exactly 18 months since 25 August 2017, when violence erupted in Rakhine state of Myanmar, forcing people to flee.

Ahead of the cyclone season in April and May, the Bangladesh Red Crescent and government agencies are also training thousands of volunteers from the Rakhine community in cyclone preparedness.

In the past 18 months, the Bangladesh Red Crescent, supported by IFRC and Red Cross and Red Crescent partners from around the world, has reached over 250,000 people with emergency help including food, water and shelter equipment. More than 160,000 have received medical care.

Head of the IFRC country office in Bangladesh Azmat Ulla said housing conditions in these camps are basic.

"However, after 18 months, they've dramatically deteriorated, leaving people worryingly exposed. The aid community in Cox's Bazar needs to prioritise repairing and replacing these battered shelters, so that people have some protection against the elements, and are provided with at least some basic comfort and dignity," he said.

The Bangladesh Red Crescent Society, supported by IFRC and other Red Cross and Red Crescent partners, has so far trained 8,400 people to make their shelters safer, and more training is coming.

Secretary General of the Bangladesh Red Crescent Feroz Salah Uddin said people, in the coming months, need sturdier structures that can resist cyclones and other forms of disasters.

"Our trained technicians are helping camp residents improve their own shelters. This is especially important for people with disabilities, the elderly as well as female and child-headed households," he said.

Azmat Ulla said all the cyclone preparedness training, well-rehearsed emergency drills and necessary equipment in the world will not protect people if a deadly tropical cyclone barrels up the Bay of Bengal, as has happened in the past.

The fact remains that these people have nowhere to evacuate to, he said adding that "The pitiful state of people's shelters illustrates how utterly unsustainable and unsafe this life is. We continue to call for an urgent political solution to this crisis. But in the meantime, more is needed to at least provide people with basic comfort and dignity."