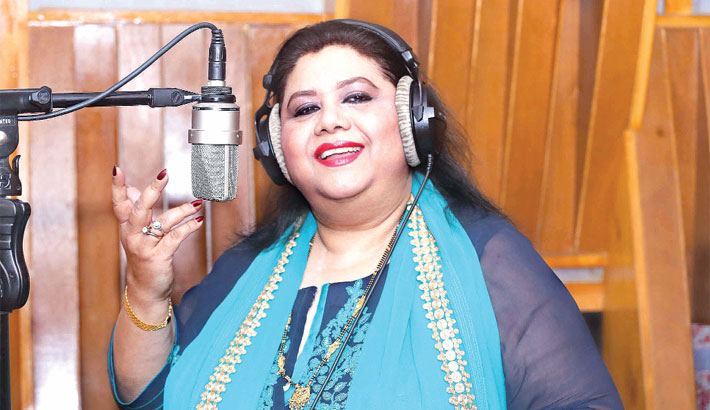 Internationally acclaimed Bangladeshi singer Runa Laila has lent her voice in a new song recently after a long hiatus.

Written by prominent lyricist Kabir Bakul, London’s music arranger Raja Kaasheff has been arranged the music of the song.

The song titled ‘Ferate Parini Aar Tomake A Bhalobasay’ has been recorded at the studio of Chirkutt in the capital’s Niketan area on February 14.

The song will be released under the banner of Dhruba Music Station very soon.

Runa Laila was very emotional while rendering her voice in the song after a long hiatus. And another reason for being that Runa Laila sang a song her own melody for the first time.

Talking about the song Runa Laila said, “I would like to thank to Dhruba Guha.  Because, it has only possible for Dhruba Guha. Dhruba’s interest in music has fascinated me. And Kabir  Bakul has done a great job.  I also thank to Raja Kaasheff for wonderful music arrangement. I am very much optimistic about the song. I hope the audience will enjoy the song very much.”

It is mentionable that, a music video of the song will also be made very soon.

Runa Laila is a Bangladeshi playback singer, widely regarded as one of the most popular singers in South Asia. She started her career in Pakistan film industry in late 1960s. Her style of singing is inspired by Pakistani playback singer Ahmed Rushdi and she also made a pair with him after replacing another singer Mala.