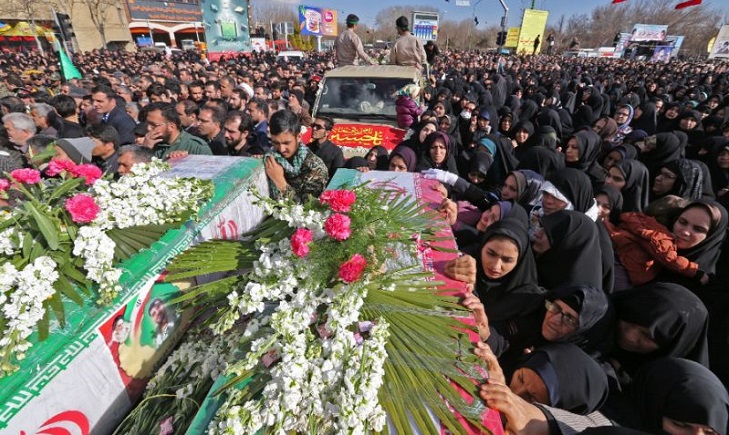 Tens of thousands of Iranians called for "revenge" Saturday at the funeral of 27 Revolutionary Guards killed in a suicide attack perpetrated by jihadists that Tehran accuses Pakistan of supporting.

"The government of Pakistan must pay the price of harbouring these terrorist groups and this price will undoubtedly be very high," said Major General Mohammad Ali Jafari, referring to jihadist outfit Jaish al-Adl ("Army of Justice").

"The Islamic Republic of Iran will no longer observe the previous reservations and will directly act to counter such acts," Jafari told mourners gathered at the city of Isfahan's Bozorgmehr Square.

The comments by Jafari, commander of Iran's elite Revolutionary Guards, came a day ahead of a planned two-day visit to Pakistan by Mohammed bin Salman, the crown prince of Iran's regional arch-rival Saudi Arabia.

As he left the podium, people shouted "Commander of Sepah (Farsi for Revolutionary Guards) -- Revenge! Revenge!".

The Wednesday bombing targeted a busload of Revolutionary Guards in the volatile southeastern province of Sistan-Baluchistan, which straddles the border with Pakistan.

Jaish al-Adl was formed in 2012 as a successor to the Sunni extremist group Jundallah (Soldiers of God), which waged a deadly insurgency for a decade before it was severely weakened by the capture and execution of its leader Abdolmalek Rigi in 2010.

Jafari also blasted "the traitorous governments of Saudi Arabia and (the) Emirates" and said Iran will no longer tolerate their "hidden support for anti-Islam thugs and Takfiri groups".

He called on President Hassan Rouhani and the country's Supreme National Security Council to give the guards more freedom to carry out "retaliatory operations," but did not elaborate.

Iran's supreme leader Ayatollah Ali Khamenei has linked the perpetrators of Wednesday's attack to "the spying agencies of some regional and trans-regional countries".

Black flags attached to lamp-posts adorned Isfahan as the city prepared for the funeral and two days of mourning.

When the bodies of the troops arrived on the back of Toyota vans -- the guards' signature vehicles -- their comrades, women in black veils and young men in jeans were there to greet them.

Tens of thousands chanted "Down with America!" and "We will never submit!"

Iran's flag could be seen at half-mast in Bozorgmehr Square's southeastern side, and the crowd chanted "Allahu Akbar" each time the speaker read the names of the dead.

The troops killed in the bombing belonged to the Guards' 14th Imam Hussein Division, which is based in Isfahan province, according to Tasnim news agency.

Aged from 21 to 52, each will be buried in his hometown after the funeral.

A housekeeper originally from Khuzestan province, where a deadly attack killed 24 last year, told AFP of the thirst for revenge.

"We demand that the blood of these troops be avenged," said Tayebbeh Rezaee, 34. "They cannot weaken the Islamic Republic in any way -- not war, not economic attacks. So they have to stoop to such acts."

Sistan-Baluchistan has long been a flashpoint, where Pakistan-based Baluchi separatists and jihadists carry out cross-border raids.

A Revolutionary Guard was killed and five wounded in a February 2 attack claimed by Jaish al-Adl on a base of the Basij militia in the town of Nikshahr, some way from the border.

One of the wounded -- Khodarahm Heidari, who was critically injured in that attack -- died on Saturday, semi-official news agency ISNA reported.

On January 29 three members of an Iranian bomb squad sent to the scene of an explosion in the provincial capital Zahedan were wounded when a second device blew up as they were trying to defuse it, police said at the time.

And in early December two people were killed and around 40 others wounded in the port city of Chabahar, also in Sistan-Baluchistan, in an attack which Iran's Foreign Minister Mohammad Javad Zarif blamed on "foreign-backed terrorists" -- a reference to Sunni Muslim extremists.

In October, Jaish al-Adl claimed responsibility for abducting 12 Iranian security personnel near the border with Pakistan.