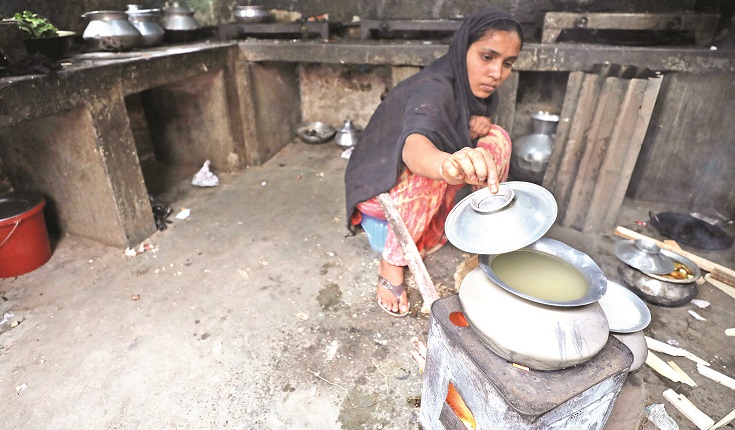 A housewife uses firewood to cook food at Kaderabad Housing in the capital's Mohammadpur for disruption to gas supply on Saturday. Sun Photo

A sudden disruption in gas supply has created huge sufferings to both household and commercial consumers since Saturday morning.

Most parts of Dhaka were affected by the disruption in gas supply due to a major leakage occurred in the grid line at Ashuganj point of the Dhanua Gas Transmission Pipeline.

The leakage was first found three to four years back and the leakage could cause a major blowout incident on Friday at 7:30 pm if the authorities concerned didn’t shut off the supply through the pipeline, an official concerned said.

“We have been informed about the leakage then shut off the distribution channels in phases,” Mostafa Kamal, managing director of Titas Gas Transmission & Distribution Co. Ltd, told the daily sun yesterday.

He said they are hopeful about repairing the pipeline by Saturday night, adding that around 20 per cent consumers of Titas have has affected by the disruption.

Long queues were seen at different restaurants in many parts of the city on Saturday as many people were compelled to eat out or buy foods from eateries due to gas crisis in households.

A technical fault in the valve of the transmission station of Gas Transmission Company Ltd (GTCL) in Ashulia has led to this sudden disruption in gas supply.

Many household users have resorted to cylinder gas, kerosene stoves or electric heater for cooking. Those who do not have these resources had to buy foods from restaurants.

Sabina Mumu, a residence of the city’s Agargaon area, told the daily sun that she could not cook their meals since Saturday morning due to gas crisis. “I had to buy from outside. But my two children are not habitual with outside foods,” she said.

Many residents living in Mohammadpur, Dhanmondi,  Mirpur, Paik Para, Pirerbag, Kallyanpur, Shyamoli, Azimpur, Hazaribagh and some others are were seen returning home empty-handed from restaurants as foods were being sold out due to higher demand.

The gas crisis has also affected the ability of the restaurants to cook sufficient volume of foods.

Hasibul Aman, a residence of Mohammadpur, said gas pressure was low in the morning and died out soon.

“If we know it earlier about the gas shortage, we could have made some alternative arrangements,” he said.