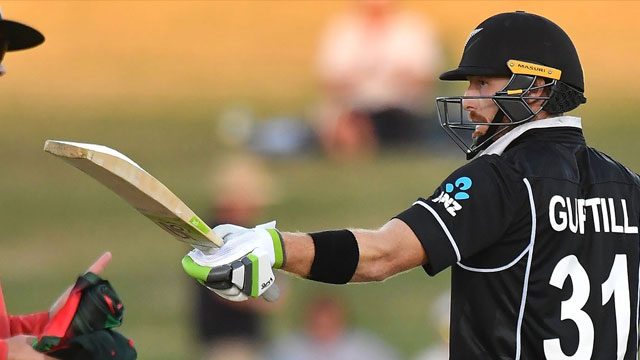 Opener Martin Guptill made it back-to-back centuries at Christchurch's Hagley Oval on Saturday as New Zealand belted Bangladesh by eight wickets to clinch the ODI series 2-0 with a match to play in Dunedin on Wednesday.

Set 227 to win, New Zealand cruised to victory with 83 balls to spare. Guptill blasted 118 from 88 balls and combined for a match-winning 143-run second wicket stand with skipper Kane Williamson, who finished unbeaten on 65.

Fresh off 117 not out in the first ODI in Napier on Wednesday, Guptill again punished the Bangladesh bowlers to all corners of Hagley Oval. He brought up his 16th ODI ton with a boundary through fine leg, drawing level with the retired Nathan Astle for the second most centuries for New Zealand.

Earlier, Bangladesh scored a decent total of 226 for all in 49.4 overs, after they forced to bat first by New Zealand.

Ferguson picked three wickets up while two each for Astle and Neesham for the home side.