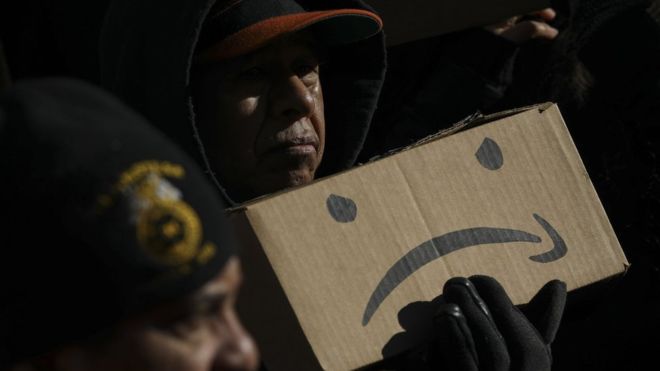 Amazon has said it will not build a new headquarters in New York, citing fierce opposition from state and local politicians.

The dramatic turnabout comes just months after the firm named New York City one of two sites selected for major expansion over the next decades.

City and state leaders had agreed to provide about $3bn (£2.3bn) in incentives to secure that investment.

Those subsidies had prompted fierce backlash in some quarters.

Amazon said its plans to build a new headquarters required "positive, collaborative relationships with state and local elected officials who will be supportive over the long term".

It said: "A number of state and local politicians have made it clear that they oppose our presence and will not work with us to build the type of relationships that are required to go forward with the project we and many others envisioned.

"We are disappointed to have reached this conclusion."

In November, Amazon announced plans to invest about $2.5bn and add more than 25,000 "high-paying" jobs at campuses in New York and near Washington DC over the next two decades.

The news capped a 14-month search for a new site that saw cities and towns across North America competing to woo the e-commerce giant.

Polls had found that a majority of New Yorkers also supported Amazon's plan.

However, it drew opposition from unions, members of the City Council and others, including newly elected Rep Alexandria Ocasio-Cortez, angry over the billions in incentives promised to one of the world's most valuable companies.

The risk of rising rents, which have spurred tensions in Amazon's hometown of Seattle, were also a concern.