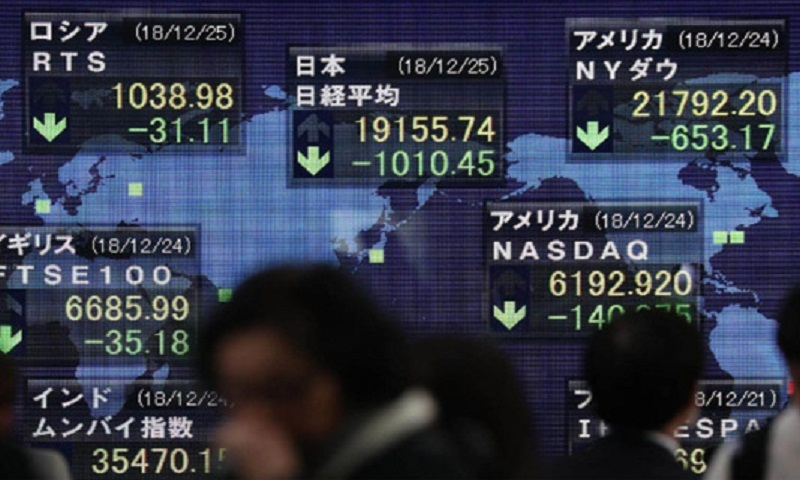 Asian stocks retreated Friday as concern grew over reports of an impasse in China-US trade talks in Beijing, and Wall Street was hit by weak US retail sales.

Bourses across the region posted losses as investors shrugged off news that US President Donald Trump would sign a massive spending bill to avert a government shutdown, while Chinese inflation eased more than expected.

Top US economic officials were due to meet President Xi Jinping in the Chinese capital as both sides aim to conclude trade talks with enough goodwill to extend a truce in their tariff war.

Trump’s economic advisor Larry Kudlow said the talks were “covering all the ground” and “the vibe is good” though no decision had been taken on extending a March 1 deadline for tariff hikes.

But multiple reports said there had been little progress on thorny issues such as US demands that China crack down on forced technology transfers and reduce subsidies that favour domestic companies.

The Wall Street Journal said China had offered to boost imports of US goods with promises of major purchases of semiconductors and other items, but that officials “remained deadlocked on a number of issues”.

And Bloomberg News reported that the two sides had “failed to narrow the gap around structural reforms to China’s economy that the US has requested”.

Failure to resolve the dispute would initiate a sharp hike in US tariffs on $200 billion of Chinese goods which could slow the global economy.

Seoul, Taipei, Wellington and Jakarta all posted losses too, though Sydney edged up.

Factory and consumer price inflation in China rose at a slower rate than expected in January, official data showed Friday.

The weak producer prices were “a concern since these are highly correlated with profit growth in industry”, Julian Evans-Pritchard of Capital Economics said in a research note.

Wall Street fell earlier after the Commerce Department reported US retail sales had dropped 1.2 percent in December from the previous month, marking the largest month-to-month decrease since September 2009.

The report suggested American consumers had held back during a peak holiday shopping season that coincided with a plunge in the stock market.

The US Congress passed a spending bill to avert a government shutdown, and Trump has signalled he will sign it before a midnight Friday deadline.

But the positive news was offset as the American president alarmed lawmakers with a plan to declare a national emergency to fund his controversial wall on the Mexico border.

Meanwhile, oil continued to climb due to falling global output after the Organization of the Petroleum Exporting Countries cut output.