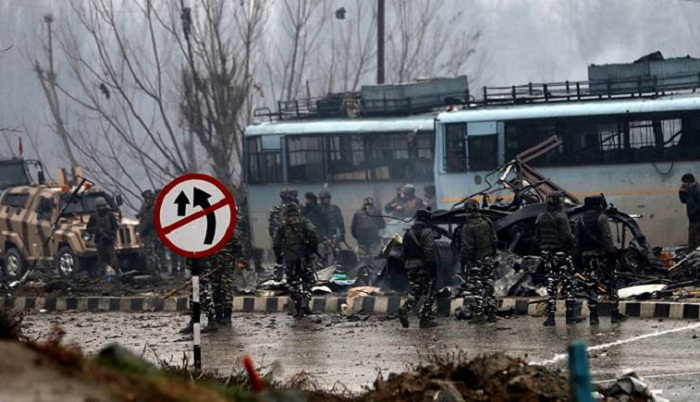 At least 40 Indian paramilitary soldiers have been killed in a bomb attack by militants on their convoy in Indian-administered Kashmir.

Police told the BBC that a car filled with explosives had rammed a bus carrying the troops to Srinagar.

Pakistan-based Islamist group Jaish-e Mohammad said it was behind the attack.

It is the deadliest militant attack on Indian forces in Kashmir since the insurgency against Indian rule began in 1989.

The blast took place on the heavily guarded Srinagar-Jammu highway about 20km (12 miles) from the main city in Indian-administered Kashmir, Srinagar.

"It's not yet clear how many vehicles were in the convoy. A car overtook the convoy and rammed into a bus with 44 personnel on board," a senior police official told BBC Urdu's Riyaz Masroor.

The official said the death toll might increase because dozens were "critically injured".

AFP news agency said Jaish-e Mohammad had sent a statement to local media saying it had carried out a suicide bombing.

Home Minister Rajnath Singh said Jaish-e-Mohammad was "Pakistan-based and Pakistan-backed" while Finance Minister Arun Jaitley said those responsible would be given an "unforgettable lesson for their heinous act".

Two former chief ministers of the state, Omar Abdullah and Mehbooba Mufti, have also tweeted about the attack.

This latest attack is likely to heighten tensions between the two nuclear-armed neighbours.

There have been at least 10 suicide attacks since 1989 but car bombs rare.

Prior to Thursday's bombing, the deadliest attack on Indian security forces in Kashmir this century came in 2002, when militants killed at least 31 people at an army base in Kaluchak near Jammu, most of them civilians and relatives of soldiers.

At least 19 Indian soldiers were killed when militants stormed a base in Uri in 2016. Delhi blamed that attack on the Pakistani state, which denied any involvement.

The latest attack also follows a spike in violence in Kashmir that came about after Indian forces killed a popular militant, 22-year-old Burhan Wani, in 2016.

More than 500 people were killed in 2018 - including civilians, security forces and militants - the highest such toll in a decade.

Bashir Manzar, a journalist based in Indian-administered Kashmir, said the bombing would boost the morale of militants and contradicted claims the situation in Kashmir is being brought under control.

"Over the past few months, political leaders in Srinagar and Delhi have made tall claims about how the situation in Kashmir has been normalised and hundreds of militants, including top leaders, had been killed," he told the BBC.

"They claimed that militant groups were on the defensive and fewer people were joining their ranks."

The two countries have fought three wars and a limited conflict since independence from Britain in 1947 - all but one were over Kashmir.

Started by cleric Maulana Masood Azhar in 2000, the group has been blamed for attacks on Indian soil in the past, including one in 2001 on the parliament in Delhi which took India and Pakistan to the brink of war.

It is also said to have introduced suicide bombings in Kashmir, with the first such attack taking place in 2000.

It has been designated a "terrorist" organisation by India, the UK, US and UN and has been banned in Pakistan since 2002.

However Maulana Masood Azhar remains at large and is reportedly based in the Bahawalpur area in Pakistan's Punjab province.

India has often demanded Maulana Masood Azhar's extradition from Pakistan but Islamabad has refused, citing a lack of proof.