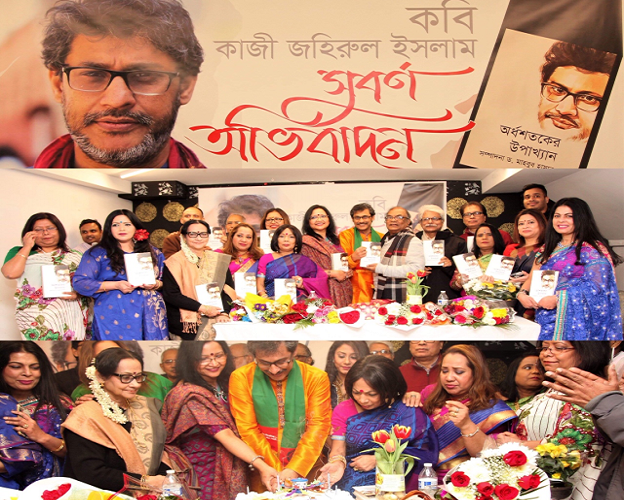 February 10,  many have gathered at the Star Kabab restaurant in Jamaica, Queens to see their favorite poet Quazi Johirul Islam for the first time. To celebrate poet Islam's birthday, his friends and relatives invited locals at this popular restaurant yesterday. Poet Islam turned 52 yesterday. Despite the inclement weather and temperature below 0 degree centigrade many fans were waiting impatiently to see their favorite poet and to wish him a happy birthday.

Around 11 am locals started to come in with different types of flowers and gifts in hands for the poet. All types of flowers in fans hands did more scent enhancing, in fact, it was pleasantly mood altering and soul-satisfying. His fans, friends, and relatives decorated the whole place with paper pinwheels, balloon backdrop, embellished party hats, ribbon chandelier, dipped vases, candle dressing, and so on. It was magical!

Many famous Bangladeshi celebrities also have attended the Poet's birthday celebration. They are including but, not limited to, actor Khairul Islam Pakhi, actress Rekha Ahmed, the editor of Weekly Ajkal  Manzur Ahmed, Poet Mahboob Hasan, Writer Shah Alam Dulal, the editor of Weekly Porichoi Nazmul Ahsan, the editor of Gangchil  Khan Sawkot, artist Mita Hossain and many others.

When asked about the Poet, Mazur Ahmed, who is the editor of Weekly Ajkal, said, "I did not know him before, but lately when I have read his travel stories, poems, and novels I became a fan of his works." Mr. Ahmed further added, "his travel stories are an amazing read, especially the ones he wrote about Africa." A friend of the poet, Kazi Shamshul Haque said, "He is a very talented writer in our community. Through him, Bengali literacy practice can go on in full forces.”

Dr. Mahbood Hasan, who reviewed few books of Poet Islam said, "In my whole life, I have only edited books about two individuals, Abid Azad and Quazi Johirul Islam because merits of their works are unique. I particularly enjoy Poet Islam's Kriapodhin or Verbless poems.” Using a microphone, in front of the podium, many of his fans and friends were reciting his poems and wishing him a very happy birthday.” One of his fans, Shahab Uddin Sagor, said, "Quazi Johirul Islam is my favorite poet. I don't know but something about his poems I find it very soul-satisfying. Through his poetry, he protests against ill-doers of the society."

Another well-wisher and fan of the poet Islam, Anwar Hossain Manzu said "In childhood, he wanted to become a prophet; instead he became a poet. He can write simultaneously, almost about everything, with great quality." There were free foods at this location. Many were observed eating and taking pictures of this event, taking pictures with the favorite poet and celebrities at the location. Khan Sawkot while sitting on a chair said, "In my opinion, Mr. Islam is a very talented poet, and as a person, he is even greater! On his birthday I really wish him well, and I hope to attend many of his birthday events in the future."

Quazi Johirul Islam was born in Bangladesh. He has written over 55 books, 19 of them are poetry collections, rest are travelogues, fictions and essays.