NASA's faraway space snowman has flat, not round, behind 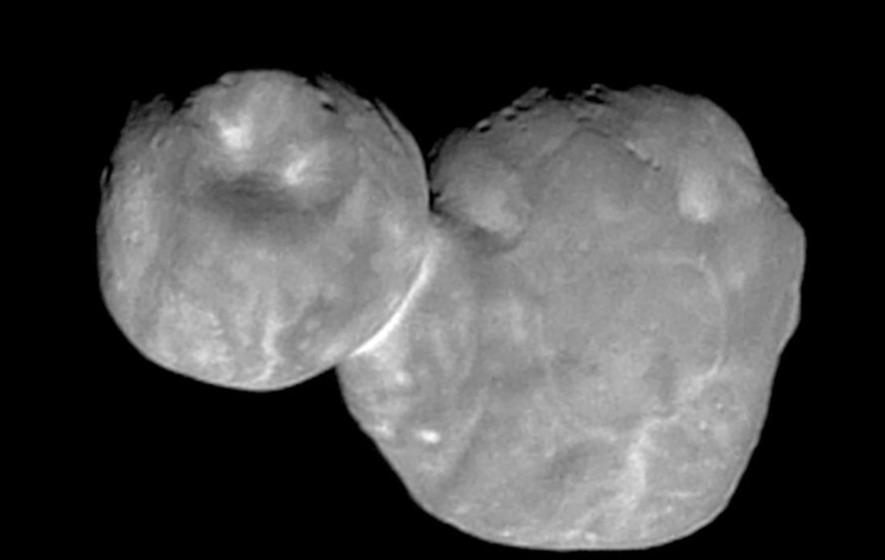 The faraway space snowman visited by NASA last month has a surprisingly flat — not round — behind.

New photos from the New Horizons spacecraft offer a new perspective on the small cosmic body 4 billion miles (6.4 billion kilometers) away.  The two-lobed object, nicknamed Ultima Thule, is actually flatter on the backside than originally thought, according to scientists.

Pictures released late last week — taken shortly after closest approach on New Year's Day — provide an outline of the side not illuminated by the sun.

When viewed from the front, Ultima Thule still resembles a two-ball snowman. But from the side , the snowman looks squashed, sort of like a lemon and pie stuck together, end to end.

"Seeing more data has significantly changed our view," Southwest Research Institute's Alan Stern, the lead scientist, said in a statement. "It would be closer to reality to say Ultima Thule's shape is flatter, like a pancake. But more importantly, the new images are creating scientific puzzles about how such an object could even be formed. We've never seen something like this orbiting the sun."

Ultima Thule — considered a contact binary — is the most distant world ever explored. New Horizons zipped past it at high speed, after becoming the first visitor to Pluto in 2015. Mission managers hope to target an even more distant celestial object in this so-called Kuiper Belt, on the frozen fringes of the solar system, if the spacecraft remains healthy.

New Horizons is already 32 million miles (52 million kilometers) beyond Ultima Thule. It will take another 1 ½ years to beam back all the flyby data.

The spacecraft rocketed from Florida in 2006.