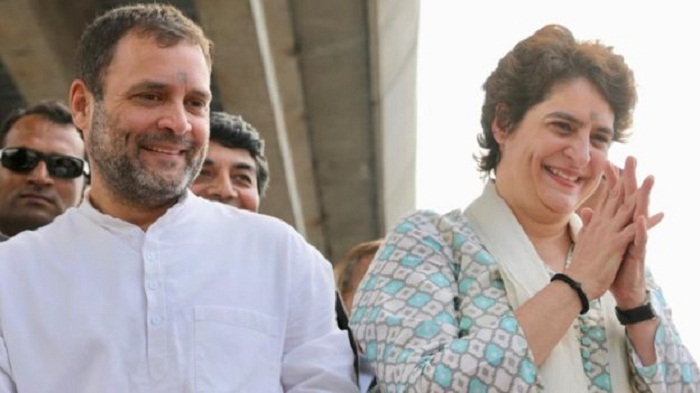 Thousands of Indians thronged the streets to greet Priyanka Gandhi as she made her first public appearance after formally joining politics last month.

She arrived with her brother, main opposition Congress party president Rahul Gandhi, in the northern city of Lucknow to cheering supporters.

Analysts say she will infuse fresh energy into the Congress campaign ahead of general elections due this summer.

She has been likened to former PM Indira Gandhi, her grandmother.

The BBC's Geeta Pandey, who is at the roadshow in Lucknow in Uttar Pradesh state, said slogans of "long live Rahul Gandhi and Priyanka Gandhi" greeted the two politicians. Tens of thousands of people have come out on to the streets to cheer them on.

They were accompanied by Jyotiraditya Scindia, the general secretary for Uttar Pradesh West, and were surrounded by special security forces.

Congress was routed by Narendra Modi's Bharatiya Janata Party (BJP) in the last general election in 2014 and has found it hard to recover.

Many Indians, including those at the Lucknow event, are excited about what her entry into politics will mean for Congress.

"The party workers and supporters are charged up. They are talking about the party winning the elections and ousting Modi to form the next government," our correspondent added.

Priyanka Gandhi has always been considered the more popular of the Gandhi siblings, with many blaming the "lacklustre leadership" of her brother for a string of Congress state election defeats between 2014 and 2018.

Although she has campaigned extensively for her brother and mother, Sonia Gandhi, in earlier elections, Priyanka had refused a formal political role for herself.

But she was appointed the party general secretary for the eastern part of the crucial state of Uttar Pradesh on 23 January.

The party has gained some ground in recent state elections and Gandhi's stock has risen, but Congress still faces a tough challenge to beat the BJP and regain power.