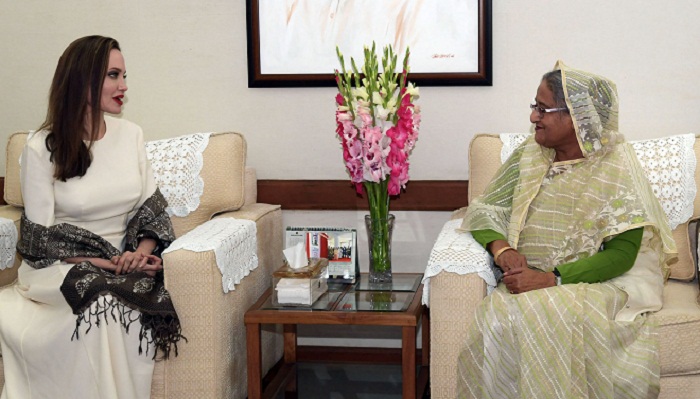 UNHCR special envoy Angelina Jolie on Wednesday said the UN Refugee Agency and the World Bank will work together to reduce the burden on Bangladesh.

Angelina Jolie also a famous Hollywood actress, made the remarks when she met Prime Minister Sheikh Hasina at her official residence Ganabhaban.

Jolie also noted that it is one of the toughest tasks to feed and manage so many Rohingyas sheltered in Bangladesh.

Angelina Jolie described Prime Minister Sheikh Hasina as an ‘example-setting leader’ in the world for providing shelter to huge displaced Rohingyas in Bangladesh. 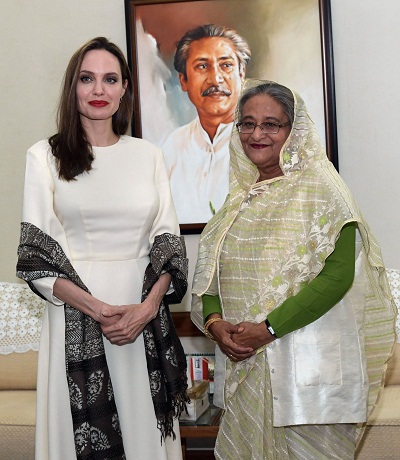 She said leaders like Sheikh Hasina are very few in number in the present world, and the world needs such leaders.

The famous Hollywood actress said Rohingyas will have to be brought back to Myanmar creating a congenial atmosphere in Rakhine State.

About the Rohingya children, she said their future is being destroyed although Bangladesh is trying to cooperate for their education, health care and other issues.

Jolie mentioned that she heard about recent incidents of dragging and killing of the Rohingya women in Rakhine.

Welcoming the UNHCR special envoy, the Prime Minister said the Rohingya crisis must be resolved.

Noting that Myanmar is Bangladesh’s next-door neighbour, she said an agreement was signed with the country on the repatriation of its nationals from Bangladesh.

Sheikh Hasina, however, expressed her disappointment over the delay in implementing the agreement.

She said some 11 lakh Rohingyas have been given shelter in Bangladesh, while some 40,000 new babies were born at the Rohingya camps.

Referring to her government’s initiative to relocate Rohingyas to Bhashan Char Island in Noakhali, the Prime Minister said some 1 lakh Rohingyas will initially be shifted ensuring a better living condition there for temporary shelter.

She mentioned the bitter experiences the people of Bangladesh underwent during the Liberation War in 1971 when over 10 million people took shelter in neighbouring India.

Hasina also described the moments of her life when she along with members of the Bangabandhu family, including her mother, were in house-arrest in 1971 as well as her life in exile for more than six years after the brutal assassination of Father of the Nation Bangabandhu Sheikh Mujibur Rahman in 1975.

The UN special envoy expressed sorrow listening to the painful stories from the Prime Minister.

On Monday morning, Angelina Jolie arrived here on a three-day visit to Bangladesh.

She went to Cox’s Bazar on Monday to assess the humanitarian needs of the Rohingyas in her role as the UNHCR special envoy. This is the special envoy’s first visit to Bangladesh.