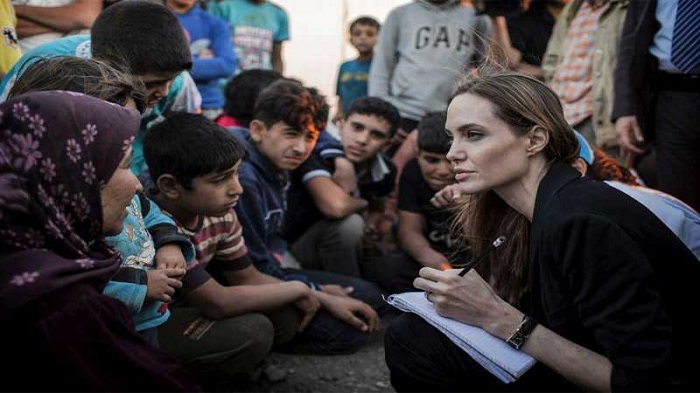 The UNHCR special envoy will have a meeting on Tuesday with concerned authorities and visit the Kutupalong refugee camps around 11 am.

Later she will talk with journalists, the commissioner added.

Earlier in the morning, the Tomb Raider actress arrived in Cox’s Bazar to assess the humanitarian needs of the Rohingyas in her role as UNHCR special envoy.

During her three-day mission in the district, she will also assess some of the more critical challenges facing Bangladesh as a host country, according to UNHCR.

Bangladesh is now hosting nearly 1.3 million Rohingyas. The majority of Rohingyas - more than 620,000 people - live in just one area: Kutupalong, the largest refugee settlement anywhere in the world today.

The special envoy will conclude her Bangladesh visit after holding official meetings with Prime Minister Sheikh Hasina and Foreign Minister Dr AK Abdul Momen as well as other senior officials in Dhaka.

During the meetings, she will discuss how UNHCR can best support the current response led by the Bangladesh government, along with the need for safe and sustainable solutions to the plight of one of the world's most persecuted minorities, UNHCR said.

Her visit comes just before the launch of a new appeal for the humanitarian situation in Bangladesh - the 2019 Joint Response Plan - which seeks to raise some $920 million to continue meeting the basic needs of Rohingyas and the communities hosting them.

Bangladesh has been heavily affected by the influx of more than 730,000 Rohingya refugees from Myanmar since August 2017 and now hosts nearly a million refugees, said the UN refugee agency.

The special envoy focuses on major forced displacement crises, representing UNHCR and the High Commissioner at the diplomatic level.

She arrived in Dhaka around 8am and reached Cox's Bazar at 10:10am. This is the special envoy's first visit to Bangladesh.

Jolie previously met with displaced Rohingyas during a prior visit to Myanmar in July 2015 and in India in 2006.

After years of dedicated service to UNHCR and the cause of refugees, Angelina Jolie was appointed special envoy in April 2012.

In her expanded role, Jolie focuses on major crises that result in mass population displacements, undertaking advocacy and representing UNHCR and the High Commissioner at the diplomatic level.

She also engages with decision-makers on global displacement issues.

Through this work, she has helped contribute to the vital process of finding solutions for people forced to flee their homes.

Jolie previously represented UNHCR as a Goodwill Ambassador from 2001-2012.

She has worked tirelessly, carrying out nearly 60 field missions and becoming an influential advocate on refugee and displacement matters.