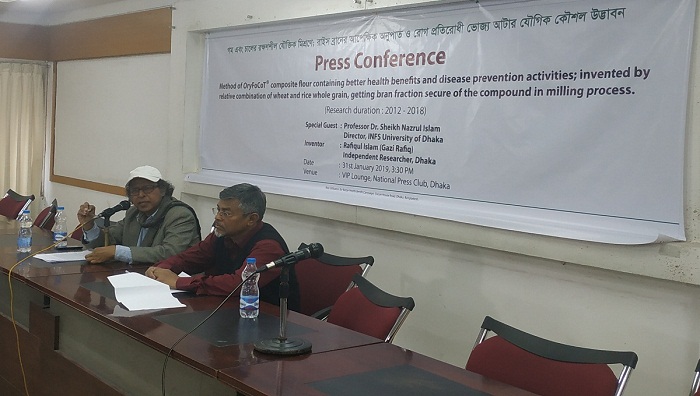 With a view to providing a nutritious and healthy diet to people, a Bangladeshi researcher has invented a wheat and rice bran-infused special type of flour, ‘OryFo-cot’.

In order to ensure more organic and natural sources of food, researcher Rafiqul Islam has been continuing the research for more than eight years and finally came out successful.

“Extensive milling and polishing process is leading the rice that we are consuming to be less nutritious as the outer portion or bran holds most nutrients,” he said at a press conference at Jatiya Press Club on Thursday.

He also said that flour we get from wheat is added with artificial nutrition elements which do not suffice human need.

According to Rafiq’s research, mixing 1 to 1.4 percent of rice bran with whole grain wheat can produce a type of edible flour which is high in fibre and anti-oxidant properties.

“Rice bran is used as a concentrated nutrient source of food additives in abroad. I have commenced my research for seven years and after much experiment, I have been able to produce flour with ‘OryFo-cot’ formula,” Rafiq added.

Rafiqul Islam is a graduate of Chittagong University and had been doing research on consumer science using rice bran from 2012 to 2018.

Rafiq expressed hope that once his invention is approved by the government, mass production will be possible for a limited cost as well as will serve people of the impoverished class of the country.

Dhaka University Professor Dr Sheikh Nazrul Islam, director of Institute of Nutrition and Food Science (INFS), who was also present as a special guest said that the composite ‘OryFo-cot’ flour can be a nutrition solution for everybody.

He also said that the research team has been in contact with the government for further expansion of their invention.