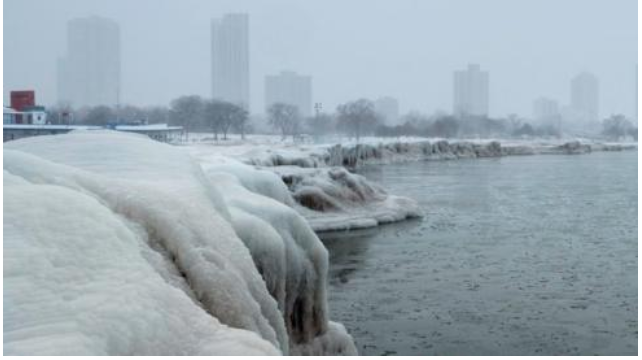 Deadly cold weather has brought what meteorologists call a "once-in-a-generation" deep freeze to large areas of the US.

Forecasters say temperatures over the next few days will go as low as -30C in the Midwest, with wind chill making it feel even colder.

At least five people are reported to have been killed across several states as a direct result of the cold weather.

Snow is expected to fall as far south as Alabama and Georgia.

As much as 24in (60cm) of snow is forecast in the state of Wisconsin, and 6in in Illinois.

Snow is expected to fall throughout Wednesday, from the Great Lakes region into New England.

A state of emergency has been declared in the Midwestern states of Wisconsin, Michigan and Illinois, as well as in the normally more clement southern states of Alabama and Mississippi.

As of Tuesday, multiple deaths have been confirmed, including a man killed by a snow plough in Chicago; another found frozen to death in a Milwaukee garage; and a young couple died after a traffic accident in snowy conditions in northern Indiana.

How is it affecting daily life?

Hundreds of schools have been closed in the affected states, and hundreds of flights grounded.

The US Postal Service has also cancelled mail deliveries to the region on Wednesday. Even beer deliveries in Wisconsin have been hit by the cold, with Wisconsin-based companies delaying shipments over fears the beer would freeze within the trucks.

The NWS is warning that frostbite is possible within just 10 minutes of being outside in such extreme temperatures.

Residents of the city of Chicago in Illinois, long used to freezing winters, have been warned to expect an unusually deep and dangerous period of cold.

Chicago mayor Rahm Emanuel has urged people not to venture outdoors unless they have to, and the city has set up dozens of "warming centres" for the estimated 80,000 rough sleepers there.