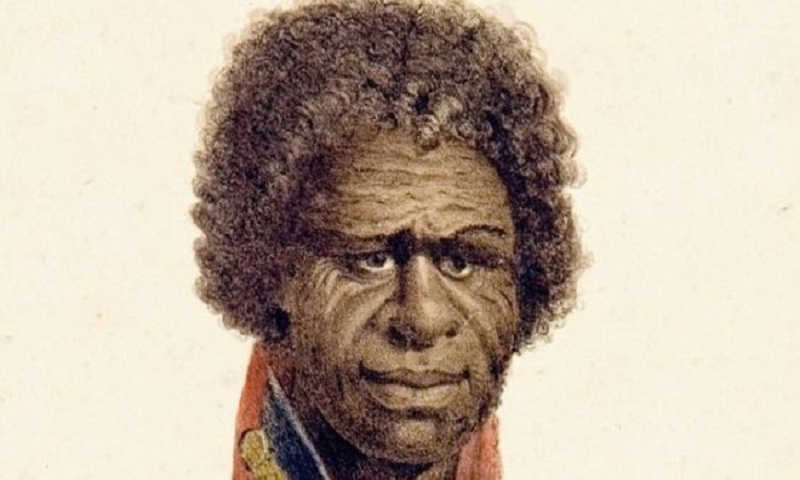 There was much excitement when the remains of Captain Matthew Flinders were discovered beneath London's Euston Station.

It was another chance to tell the tale of the brave English sailor who completed the first circumnavigation of Australia in HMS Investigator in the first years of the 19th Century.

Of course, his feat is well-remembered in the country where he made his name. His name is on everything from universities and islands, to streets and an entire mountain range.

Less well-remembered is another man who sailed alongside Flinders on the Investigator: Bungaree, the first Australian to circumnavigate the continent he was born on, without whom the success of the adventure would have been far from assured.

Bungaree was born in the area now known as Broken Bay, just north of modern day Sydney, in about 1775.

European Captain James Cook had "discovered" Australia five years earlier. By the time Bungaree was in his early 20s, huge swathes of the indigenous people who had lived in Australia for tens of thousands of years had been wiped out.

At some point in the 1790s, Bungaree made the decision to move south to the burgeoning city of Sydney. It was here where he began establishing himself as a central figure in the new colony - able to move between his own people and the newcomers.

In 1798, he joined the crew of the Reliance, which was undertaking a trip to Norfolk Island, almost 900 miles off the coast of Australia.

The voyage clearly left an impression on the young man, as it was the first of many he was to undertake. It was also the place he would meet - and impress - Capt Flinders.

It was Capt Flinders who recruited Bungaree for the Investigator's trip around the continent in May 1802. Flinders later wrote it was the Aboriginal man's "good disposition and open and manly conduct" which impressed him.

Bungaree's kindness to the ship's cat Trim would also warrant a mention in the sailor's memoirs.

However, it was more than his disposition that made him invaluable to his crewmates during the 13-month expedition.

Bungaree was the only person born in Australia on the ship - even Trim had been born at sea - and as such, played a vital diplomatic role as they made their way around the coast, overcoming not inconsiderable language barriers in places.

"He chose the role of a go-between," historian Keith Vincent Smith told ABC Sydney's breakfast show last year. "He often, by taking off his clothes and speaking to people in the very top end of Australia, could mollify the indigenous people who were about to attack the sailors."

But it was not a journey without danger for Bungaree himself, as Dr Gillian Dooley, of Flinders University, pointed out to ABC.

"It was very brave of Bungaree, because he was in uncharted territory as well."

The Investigator arrived back in Port Jackson in June 1803, having completed its circumnavigation of Australia but having failed to fully survey the entire coastline.

Back on land - where his height and penchant for wearing old military uniforms ensured he stood out - his knowledge and wit made him a popular figure with the colonisers.

Indeed, he was so popular that in 1815 New South Wales Governor Lachlan Macquarie presented him with a brass breastplate as a reward for his loyalty, along with a large piece of land at George's Head, Port Jackson.

Two years later, he was back on board a ship, The Mermaid, helping Philip Parker King finish the survey he and Capt Flinders had attempted to complete 15 years earlier.

"There are some wonderful anecdotes in Parker King's journals of going ashore and asking Bungaree 'can we eat this plant'? And Bungaree says, 'I don't know what the plant is, so maybe we should not eat it'," John Paul Janke, the co-chair of the National NAIDOC committee, told ABC's The World Today.

"In some cases, there's a potential that he might have saved people's lives by telling them what not to eat or what to eat.

"So to me he was more than just someone who was taken on board to show them around. He was actually, I think, a very strong confidante for Flinders."

Bungaree did not forget his people, however.

According to Sydney Barani, while he was happy to help track escaped convicts, he "was also influential within his own Aboriginal community taking part in corroborees and ritual battles", looking after his community by "selling or bartering fish".

As Russian Captain Thaddeus Bellingshausen wrote, Bungaree "has always been noted for his kindness of heart, gentleness and other excellent qualities and has been of great service to the colony", but also "often endangered his life in his efforts to keep the peace within his tribe".

Despite the accolades from the Europeans, the racist undertones were never far away.

"The facetiousness of the sable chief, and the superiority of his mental endowments, over those of the generality of his race, obtained for him a more than ordinary share of regard from the white inhabitants of the colony," the Sydney Gazette wrote in an article announcing his death in 1830.

Today, his legacy appears almost all but forgotten. There are statues to Flinders and even the cat Trim, but as yet, there are no statues to Bungaree recognising his role in the exploration of Australia.

"It breaks my heart that we, as Australians, don't have a statue to Bungaree that celebrates an iconic figure and someone who actually assisted in building this continent and building our nation's history," Mr Janke said.

No doubt, with the discovery of Capt Flinders' grave and the renewed interest in the Investigator, there are hopes this will soon change.