Life after leprosy in Vietnam 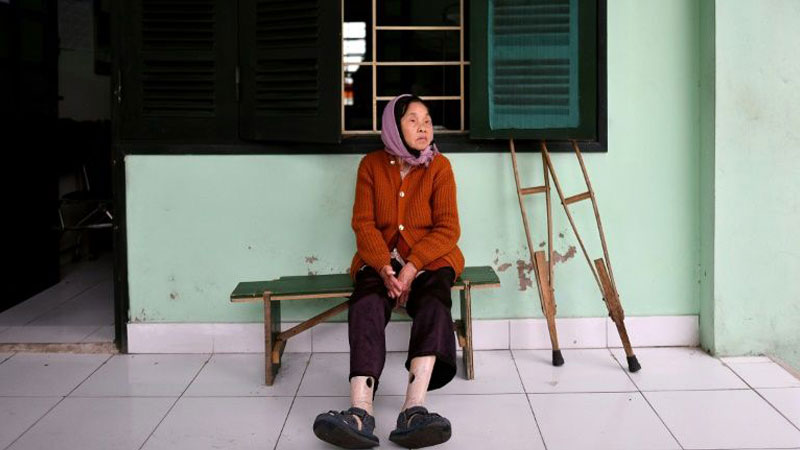 Mr Tran Huu Hoa was scared, desperate and on the verge of suicide after his leprosy diagnosis in 1958, fearing he'd never work or marry in an age when lepers were completely shunned from Vietnamese society.

He could not imagine he would find new life at the leprosy hospice where he has been living for 61 years, a walled-off compound in northern Thai Binh province where he met his wife, worked as a union boss and took in needy children.

"There were about 2,000 people here then, mostly young people. It was fun because we started a teen union," the 80-year-old told AFP, sitting on his bed with his wife Teo of 54 years.

Today, there are only 190 patients at the hospital, all cured but living with disabilities caused by leprosy.

Many walk with prosthetic legs. Others like Mr Hoa have lost fingers. Some are so severely disabled they spend the day bent over in bed, covered with thick blankets to keep the cold at bay.

Founded in 1900, Van Mon is the oldest leprosy hospital in northern Vietnam.

At its peak, it treated 4,000 patients a year - a number that has dwindled as leprosy cases have dropped across Vietnam thanks to improved healthcare, hygiene and greater awareness of the disease.

There were 248 people being treated for leprosy in 2017 in Vietnam, down by more than half from a decade earlier, according to data from the World Health Organisation.

But as numbers have decreased, so have the live-in patients at the Van Mon centre.

Meandering days are punctuated with a morning and midday meal. Some pass the time worshipping at the on-site chapel or pagoda, while most watch TV or listen to the radio during the day when they are not sleeping.

His daughter no longer visits and his grandchildren come only once a year, so he has little to look forward to most days, he says.

But many like Mr Bac chose to stay, fearing they will be a burden on their families, or lose the care and small stipend provided at the government-run hospital.

Some, like Mr Hoa, have found companions in the centre.

"It's a source of encouragement and motivation and they can have a happier and better life," said Mr Nguyen Thi Thai, deputy director of the hospital where both her parents were once treated for leprosy.

And even though stigma against leprosy sufferers has largely faded outside the walls of the hospice, many prefer to remain at Van Mon.

Mr Hoa said: "This is my second home, I will live here until my death."