'Four dead' in Venezuela as thousands rally against Maduro 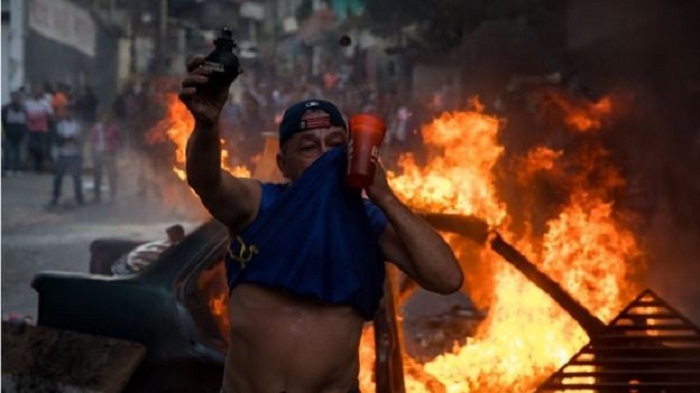 Thousands of people are gathering across Venezuela to march in protest against President Nicolás Maduro.

Four people are said to have died in clashes before the protests, as riot police mobilise to guard demonstrators.

The US government has signalled its support of Guaidó and called for President Maduro to go.

Early images from Wednesday's protests show some demonstrators facing off against National Guard security forces in the capital Caracas.

Anti-government protestors have turned up in "many cities" across the country, newspaper Tal Cual reported Wednesday.

Other demonstrations are being held in support of Maduro.

US Vice-President Mike Pence has publicly signalled his support for opposition protestors.

In an opinion piece for the Wall Street Journal, Pence said the US "strongly supports the National Assembly and Guaidó".

The opposition protest aims to back an attempt by Guaidó to establish a transitional administration ahead of new elections.

The governing Socialist Party has announced a rival protest to counter the opposition march.

Wednesday's demonstrations come just two days after 27 National Guard soldiers allegedly revolted against the government at a guard post in the capital, Caracas.

Government officials dismissed it as a cover to steal weapons.

Addressing soldiers on Monday, Guaidó promised amnesty for those who refused to serve the government.

Guaidó called for demonstrations after Maduro was sworn in for a second presidential term this month.

He was re-elected in a May 2018 vote boycotted by the opposition and condemned by many in the international community.

Guaidó wants to replace Maduro and serve as an interim president ahead of elections.

Venezuela's Supreme Court on Tuesday asked the state prosecutor to investigate whether Guaidó had committed a crime.

Millions have fled Venezuela in recent years amid a deepening economic crisis brought on by a drop in the price of oil in 2014.