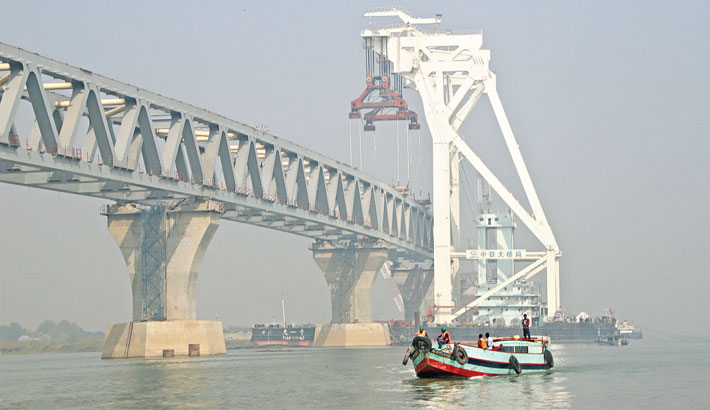 The seventh span of the Padma multipurpose bridge was installed on Wednesday. A floating crane placed the 150-metre span at the Jajira end of the bridge. —sun Photo

The seventh span of Padma multipurpose bridge overall has been installed.

On Wednesday, a 150m span was installed on piers no 36 and 37 of the bridge at Jajira point.   Prior to installing this one, the engineers installed another 150m span on piers no 4 and 5 at Mawa point separately.

A floating mighty crane installed the 150m span on piers no 36 and 37 of the bridge around 10:00am after two hours of hectic efforts, project engineers informed.

This is the sixth span of Padma Bridge at Jajira point and the seventh span of the mega bridge overall.

Earlier on Tuesday, the crane started carrying the 3,140 tonne-span from Kumarvog construction  yard in Mawa point after a month-long dredging was done to facilitate the movement.

Another span is also awaiting to sit on piers no 35 and 36 at Mawa point soon, which will make one kilometre of the much-hyped bridge visible at a stretch.

A total of 41 spans will sit on 42 piers of the 6.15km double-deck bridge that will allow plying of both regular traffic and railway.

Trains will ply through the lower deck while other vehicles will use the upper deck.

So far, the project’s overall progress was 63 percent with the main bridge construction advancing 72 percent and river training work 49 percent, according to project data.

The project was first visible when the first span was installed on 37th and 38th piers on September 30, 2017.

Currently, work on laying rail slabs is going in the lower deck of the installed spans, while 300 spans for six-lane road are ready to be installed on the upper deck, project officials informed.

The spans are being made in China and later they are shipped in parts to Kumarvog construction yard where they are assembled.

The project missed the December 2018 completion deadline because of problematic soil condition beneath 14 piers, which has now been overcome after redesigning of those piers with the help of specially appointed foreign consultants.

Earlier, the project faced a major setback after financing related tussle with the World Bank which raised graft allegations against a minister and some government officials.

In the wake of a solution to the piling problems, at present the project officials hope to complete the mega project within the new deadline of December 2019 or a delay of three months more.