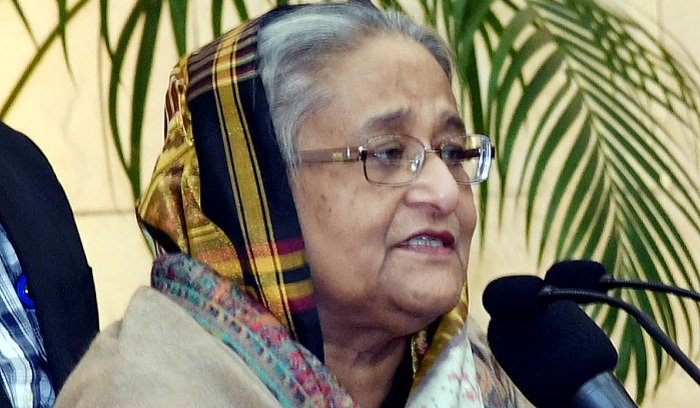 Stressing that Awami League should keep the honour of the trust and confidence the people placed in the party in the December-30 election, Prime Minister Sheikh Hasina on Sunday asked the party men to go ahead with utmost patience and tolerance showing respect to the people’s mandate.

She was addressing leaders and workers of Awami League and its assisted bodies from Tungipara and Kotalipara of Gopalganj at her official residence Ganabhaban in the evening.

"People gave their mandate in favour of Boat in the last election for the third consecutive term as the Awami League government ensured massive and balanced development of the country," the Prime Minister said.

Putting emphasis on upholding the dignity of the massive mandate of people, she said huge development works are now underway. "These will have to be completed in time, while more new projects will be taken to further advance the country," she added.

Following the principles of Father of the Nation Bangabandhu Sheikh Mujibur Rahman, Sheikh Hasina said she has been working to materialise his dreams and ideals. “The main inspiration of my politics is Bangabandhu and Begum Fazilatunnesa Mujib.”

She heavily criticised BNP leaders for their negative remarks on the 11th parliamentary election.

About conviction of BNP Chairperson Khaleda Zia and her elder son Tarique Rahman, Sheikh Hasina said the BNP chief has been in jail following the court verdict for her corruption while Tarique is a fugitive and convicted person for corruption, money-laundering and August-21 grenade attack.

About BNP’s defeat in the last general election, she said the convicted and fugitive BNP leader started the nomination trade placing seats on auction foreseeing the imminent defeat beforehand.

The Prime Minister also said the BNP leaders staged a drama in the name of participation in the polls as their aim was to make it questionable.

She said the government has executed verdicts on war criminals and Bangabandhu’s killers as well as those involved in the jail killing.

Besides, the trial of corrupt elements, money-launderers and August-21 grenade attackers have also been completed, Sheikh Hasina said, adding that the country has now freed from the stigma.

She firmly mentioned that her government will certainly take the country towards development and prosperity further so that no one has to undergo any misery.

The Prime Minister asked the party men to convey her greetings and gratitude to the people of Tungipara and Kotalipara for their unflinching support time and again to her.