Bangladesh to continue on its path to peace, dev, progress, he hopes 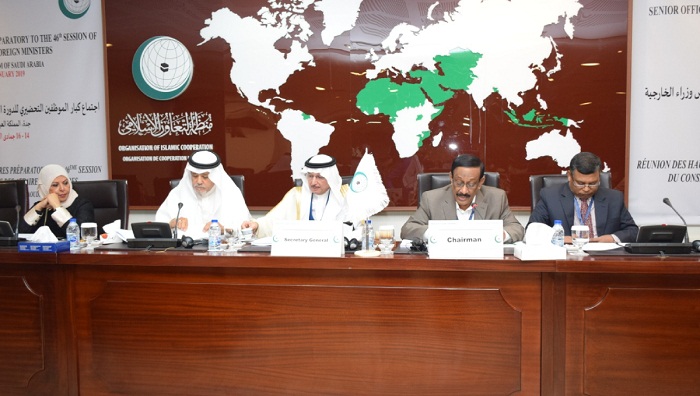 The OIC Secretary General made the remarks while delivering his speech at the OIC Senior Officials meeting on Sunday in preparation for the 46th Council of Foreign Ministers.

Secretary General Dr Al-Othaimeen also expressed his felicitations during a call on him by Foreign Secretary Haque today at Jeddah, said the Foreign Ministry in Dhaka.

In the hour-long discussion, they discussed matters of common OIC interests and issues of bilateralimportance.

The SOM is in preparation for the forthcoming 46th Council of Ministers (CFM) to be held in the UAE later this year.

Bangladesh being the outgoing Chair of the 45th CFM, had organized the last iteration of the Council in Dhaka in 2018.

Foreign Secretary Shahidul Haque opened the Senior Officials Meeting by making a statement and handed over the Chair to the Head of Delegation from the UAE – led by their Assistant Foreign Minister.

Bangladesh delegation included the Bangladesh Ambassador to Saudi Arabia and PR to the OIC Golam Mosih and other senior officials from the Ministry of Foreign Affairs.

In the Chair’s Statement, the Foreign Secretary welcomed the participants from all member states and thanked them for their cooperation and support extended to Bangladesh chairmanship.

He highlighted the achievements of the OIC under the current Chair, Bangladesh.

He referred to Bangabandhu Sheikh MujiburRahman in outlining a concrete pathway for the OIC and Bangladesh’s participation in the OIC for a dignified and progressive existence of the Islamic Ummah.

Foreign Secretary Haque underlined that the issue of Palestine and that of the Rohingyas dominated the entire corpus of discussions of the OIC under Bangladesh chairmanship.

Foreign Secretary Haque thanked the member states of the OIC for giving leadership to the Ummah in waking up to the unprecedented humanitarian challenges posed by crises in these two theatres.

He highlighted the important leadership given by Bangladesh in the UN resulting in an Emergency UN General Assembly resolution for the civilian protection of the Palestinians.

Foreign Secretary Haque sought similar level of commitment for addressing the Rohingya crisis and called on the OIC Member States to elevate their level of engagement for ensuring a sustainable return and accountability framework for the Rohingyas.

Outlining the Bangladesh tenure at the CFM Chair, Foreign Secretary Haque highlighted a number of Intergovernmental Groups of Experts (IGEs) chaired successfully by Bangladesh during last one year.

These IGEs included formulation of a new mechanism on peace and dialogue to address Islamophobia, differences and tensions in the Islamic world.

He also mentioned a number of important meetings held in New York during the 72nd UNGA including the Annual Coordination Meeting (ACM) of the OIC FMs which was later followed by a number of sectoral ministerial meetings in the OIC spheres of activities, such as, women empowerment, water management, science, technology and innovation.

Foreign Secretary stressed the need for a coordination meeting of the stakeholders to concretise the projects and programmes outlined in the OIC 2025 Programme of Action called the second OIC development plan.

He called on the OIC Member States to dream big and substantiate the dream with solid and unflinching action.

Foreign Secretary Haque also participated in a consultation meeting at the Senior Officials’ level - of the member states of the newly formed Ministerial Ad-Hoc Committee on Accountability regarding gross human rights violations of the Rohingyas in Myanmar.

The Senior Officials Meeting of the Ad-Hoc Committee discussed both the substantive and logistic protocols in preparation for the Ad-hoc Committee meetings scheduled to be held on 10 February 2019 in Gambia.