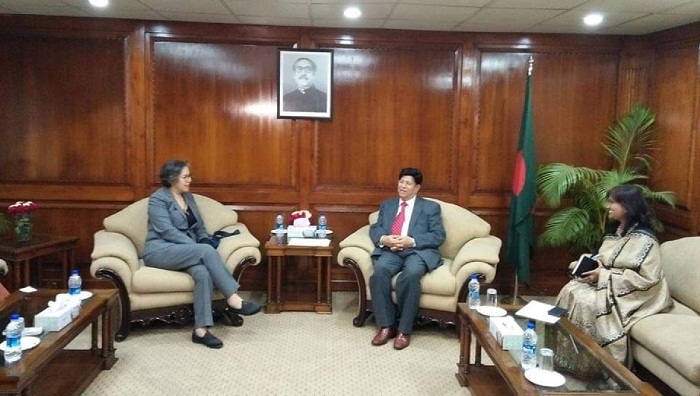 Lee, who arrived in Dhaka on Saturday, will visit Cox’s Bazar to see for herself the Rohingya situation there amid Myanmar’s continued denial to her access to Rakhine State.

After her meeting with minister Momen, the UN expert said she is going to Cox's Bazar on Monday.

Talking to reporters, she said it was a fruitful meeting and hoped that her office will collaborate and work together with the office of the Foreign Minister of Bangladesh to help address the Rohibgya crisis.

Lee, who earlier said incidents in Rakhine State bear the “hallmarks of genocide” and called for accountability in the strongest terms, also plans to visit the island of Bhashan Char in Noakhali. The Bangladesh government has planned to shift Rohingyas to the island.

The UN Special Rapporteur arrived here from Thailand where she has been since January 14.

Lee will present her findings and recommendations at the 40th session of the Human Rights Council in March 2019, according to a message received from Geneva.

The Myanmar government has maintained its decision to cease cooperation with the Special Rapporteur, and refused her entry into Myanmar.

“I still seek to engage with the Myanmar government and I remain committed to my mandate to monitor the situation of human rights in Myanmar. I’ll continue to meet with people from Myanmar and speak out about human rights issues that occur around the country,” said Lee in a statement announcing her Thailand and Bangladesh visits.

The Rohingyas in Cox’s Bazar are the victims of human rights violations committed in the midst of the violence that erupted in August 2017 forcing over 800,000 Rohingyas to take shelter in Bangladesh.

These Rohingya people have been living in camps administered by UNHCR and the government of Bangladesh with support from a slew of UN agencies and international NGOs since August 2017.

On January 9, the United Nations appealed to all sides in Myanmar to intensify efforts to find a peaceful solution to the situation and to ensure humanitarian access to all people affected by the violence.

Acting Resident Coordinator and Humanitarian Coordinator for Myanmar Knut Ostby said they are “deeply concerned” about the situation in northern and central Rakhine State, where an estimated 4,500 people have been displaced so far due to recent fighting there.