The widow who asked eight French presidents for the truth 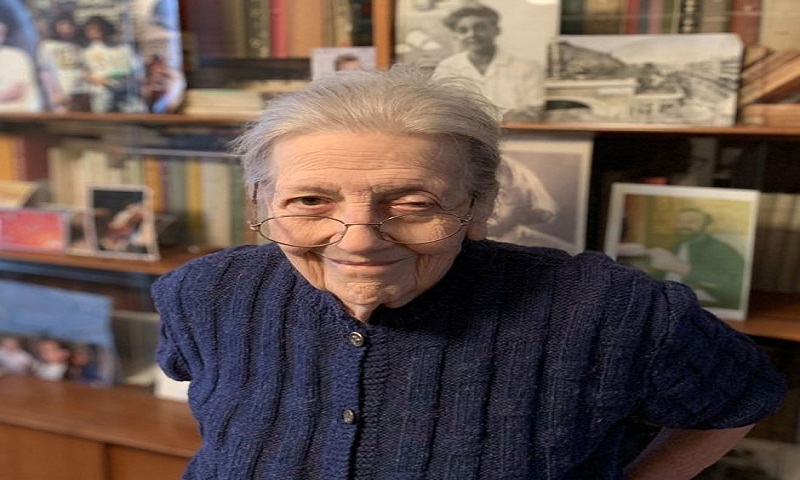 Josette Audin spent more than 60 years asking French leaders to admit responsibility for her husband's death in Algeria. Finally, last year, Emmanuel Macron acknowledged that he had been tortured and killed in custody. At the same time, he said the archives would be opened to researchers - was this an empty promise?

"This is the university where we were studying in Algiers," says Josette Audin, pointing at a photograph of a grand building with classical columns on a tree-lined square.

The 87-year-old is telling me about her life with Maurice Audin, a fellow maths student at the University of Algiers in the 1950s.

They met during a lecture, fell in love and got married. Both were of European descent - as were one in 10 of Algeria's population after 120 years of French rule - and both were communists who supported the fight for Algerian independence.

"My parents were not fighting with arms," says Josette's daughter, Michèle, "My father was doing propaganda."

In 1957, Maurice was teaching maths at the university and working on his doctoral dissertation, while Josette was bringing up their three young children.

By this point the Battle of Algiers was raging. Pro-independence groups were carrying out violent attacks and the authorities were struggling to keep control.

When it became known that the Audins had given shelter in their home to a wanted communist leader, soldiers arrived one night and took 25-year-old Maurice away.

The French in Algeria

1848: After an uprising led by rebel leader Abd-el-Kader, Paris declares Algeria to be an integral part of France

1945: As WW2 ends, thousands are killed in pro-independence demonstrations in Sétif

"My mother asked them, 'When will he be back?'" says Michèle.

"'If everything goes well,' they said, 'he will come back in half an hour.'"

But he never returned. A close friend who was arrested the next day said he saw Maurice strapped to a table, being tortured.

"After two or three weeks they told her, 'We have good news for you. Your husband has escaped,'" Michèle says.

Her mother instantly knew they were lying, Michèle says, and realised why. "She knew that he was dead."

But Josette wanted the truth from the authorities.

"She tried to publicise the case. She made a campaign but she had no means to do anything. She was just writing letters with a pen and paper."

Josette wrote to anyone she could think of who could help her cause - journalists and academics.

"I couldn't do anything else. I had no choice," she says.

In 1962, Algeria was granted independence. A few years later, Josette and her children moved to Paris. Over the years more evidence emerged that indicated Maurice had been tortured and killed. Books and many articles were written. One theory was that he was strangled by an interrogator, another that he was mistaken for someone else. A senior intelligence officer boasted in old age that he had given the order for Audin to be killed.

But despite Josette's campaign, officially there was silence.

Every time a new president was elected, Josette would write to him.

"Some answered her, some didn't even answer," says Michèle.

"She was not asking for apologies but she was asking to know the truth and some recognition of the responsibility of the (French) Republic."

Finally, in 2014, President François Hollande admitted Maurice died in custody. But the next president, Emmanuel Macron, surprised even the family.

He contacted Josette before she had even sent him a letter. Then, last September, he issued a declaration making clear the French state's responsibility for Maurice Audin's death.

A system that empowered the authorities in Algeria to stop, detain and interrogate any suspect had been a breeding ground for terrible acts, he said, including torture; Audin had been "tortured then executed, or tortured to death". On a visit to Josette's home, he asked for forgiveness.

But Maurice Audin is just one case. Thousands of people disappeared during the Algerian War, on all sides of the conflict, and in many cases nothing at all is known about what happened to them.

President Macron said he now wanted the national archives to be opened up, so that families could get answers.

Some historians are unsure what that might mean in practice, however.

It's already possible to access documents held in the national archives. Did he mean that unspecified military archives would be opened up?

Historian Raphaëlle Branche argues that incidents of torture and killing are unlikely to have been recorded in the first place.

"A lot of these activities are extra-judicial," she says. As they were not sanctioned, probably no record was made, she suggests.

Another historian, Fabrice Riceputi, says there is also evidence that documents were deliberately purged.

"At the end of the war the French army went to some effort to get rid of anything in archives that might lead to revelations about some of the crimes that were committed during the war," he says.

Riceputi did, however, make an interesting find while going through newly released documents in the French national archive centre in Aix-en-Provence.

It was a file kept by the Prefecture in Algiers of people reported missing by their families, containing the names of 850 individuals.

"The French prefer to maintain secrecy around these documents, which means that they were particularly precious and valuable," says Fabrice. "I realised that as soon as I saw them."

In the days after Macron's declaration, Riceputi uploaded these files to a website he has created with another historian, Malika Rahal, called 1,000 Autres - 1,000 Others.

He asked for people who knew the missing to get in touch if they had any information about them, and got his first response in less than 24 hours.

"I will remember for the rest of my life the first morning after we put the site online," Riceputi says.

"I opened my computer and I had a message which - and I say it without any shame - made me cry because even I wonder sometimes if the work we do is really useful to anyone."

They have now received roughly 300 witness statements about 70 individuals, many of which confirm that the missing relative never came home.

One of those is Mounira Yacef in Algiers. Her father, Lahcene Yacef, was detained and she has no idea how he died or what happened to the body.

The co-founder of the website, Malika Rahal, says: "There is huge hope for something which we are at this stage absolutely incapable of providing - the answers to where is the body and how did the person die.

"People hope we'll open up the archives and they'll contain answers to these questions, and they might not. These are questions to which you might simply never have the answers."

For Mounira, just seeing her father's name in an official document means something.

She says she has always felt an affinity with the Audin family, whose decades-long struggle she has followed from afar.

Josette Audin's daughter, Michèle, tells me this struggle has now come to an end for them, even though there is still much that they do not know.

I ask Josette if she is happy that a French president finally acknowledged the state's responsibility for her husband's death.

"Better late than never," she says.

Yasmine Belkacem was a 14-year-old schoolgirl with a beautiful face and long black curls when she joined the Algerian independence movement. For months she carried messages between members of the National Liberation Front, along with money and food to fighters in prison. Then one day she asked if she could plant one of the home-made bombs the Algerian fighters were exploding in French cafes and outside police stations.