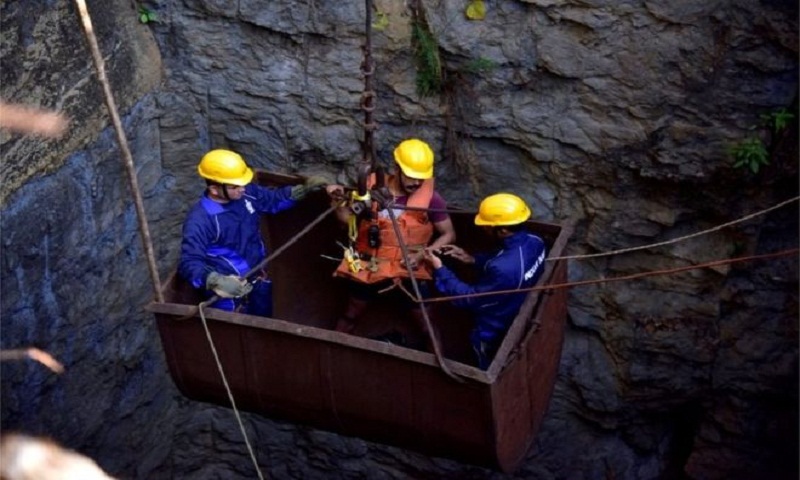 Indian navy divers have found the body of a worker who was trapped with 14 others inside a flooded coal mine in the north-eastern state of Meghalaya.

The men had entered the illegal pit, known as a "rat hole", on 13 December, and were trapped when floodwater from a nearby river poured in.

An underwater vehicle first detected the body at a depth of 160ft (48m), the navy said.

The fate of the other trapped miners is unclear.

The navy added that the body would be brought out from the mine under the supervision of doctors.

The Indian Navy gave some details of the operation in a series of tweets early on Thursday.

Some 200 rescuers have been deployed to the site, where they have been trying to drain the mine.

It is not clear whether the other miners are still alive - only three helmets had been recovered prior to the discovery of the body.

The 370ft (112m)-deep coal mine where the workers are trapped lies in the remote East Jaintia Hills district.

Rat-hole mining involves digging pits into the ground to create a narrow hole to find coal, and is dangerous for those involved. Workers, including children, descend into the mines using bamboo ladders and accidents are common.

The practice was banned in 2014, but mine owners have challenged the ruling in India's Supreme Court.

Most of Meghalaya's illegal miners are migrant labourers who come from neighbouring states to earn money.

India is the world's third largest coal-producing nation and coal provides 60% of the country's energy needs, but the industry is poorly regulated.

Workers, who are often faced with life-threatening situations, have little protection from health hazards.