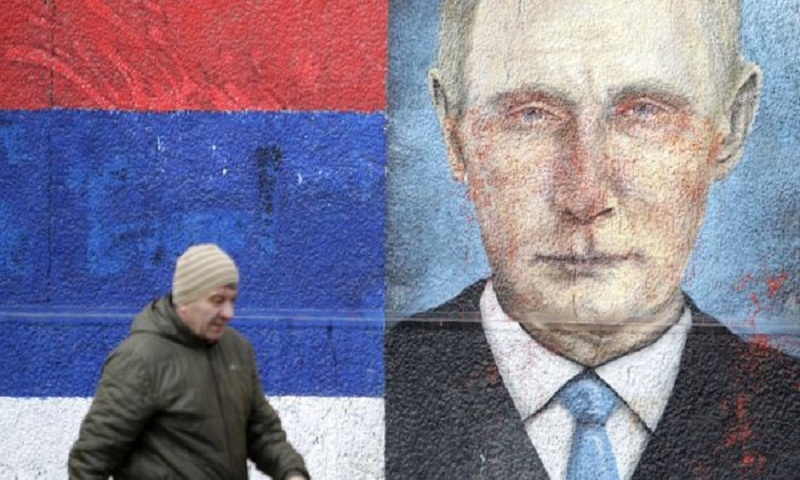 Russian President Vladimir Putin heads a powerful delegation to Serbia on Thursday, aiming to cement co-operation with a country seeking to join the EU.

Ahead of his Belgrade visit, Mr Putin accused some Western countries of "destabilising" the Balkans.

Security will be tight in the Serbian capital. MiG jets will escort his plane and 7,000 police are being deployed.

Residents are being urged not to go on their balconies to watch Mr Putin being driven through Belgrade.

The measures follow big opposition protests against President Aleksandar Vucic and his ruling SNS party over recent weeks, with demonstrators accusing him of clamping down on media freedom and attacking the opposition.

Despite the high security, tens of thousands of people are reportedly planning to greet the Russian leader's visit to the Church of St Sava, the biggest Orthodox church in Serbia.

Although Serbia is a candidate to join the European Union it remains a close ally of Moscow.

What has Putin said?

Mr Putin accused the "US and some other Western countries" of trying to secure dominance in the Balkans, by absorbing Montenegro into Nato and seeking to bring Macedonia into the Western military alliance too.

The Russian president gave two interviews ahead of his visit, highlighting centuries of ties, and reports say 21 deals are set to be signed, including on energy and defence.

President Vucic is keen on getting Russian gas, which he wants to acquire through Russia's TurkStream pipeline under the Black Sea to Bulgaria.

He also promised to continue developing military and technical co-operation with Serbia and criticised the EU's handling of Kosovo.