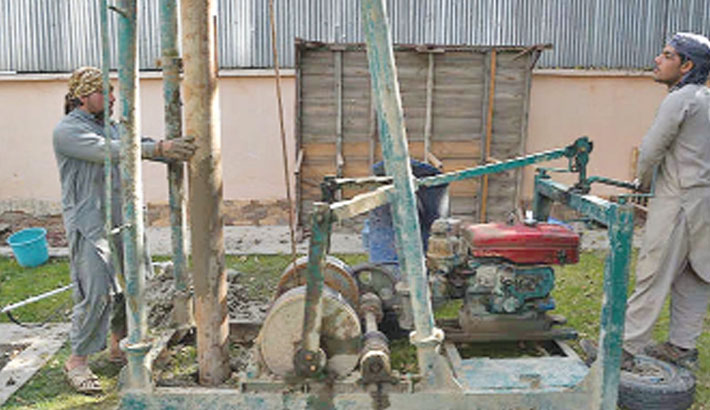 KABUL: Standing in his garden in Kabul, Baz Mohammad Kochi oversees the drilling of a new well more than 100 metres deep after his first water reservoir dried up. He is not alone, reports AFP.

A shortage of rain and snow, a booming population and wasteful consumption have drained the Afghan capital’s water basin and sparked a race to the bottom as households and businesses bore deeper and deeper wells in search of the precious resource. “The water level has dropped so much that it is now necessary to reach other underground basins 100 metres, even 120 metres” deep, says well digger Mohammad Aman as his dilapidated machine pierces the ochre earth in Kochi’s yard.

As a result Kabul’s water table has fallen at least 30 metres (100 feet) in recent years, says Asian Development Bank deputy country director Shanny Campbell. Snow has fallen in the city this month but it is not nearly enough to solve the water shortage—in some areas the level has dropped 20 metres in the past year.

“The problem we have in Kabul is the massive increase in population, impact of climate change and overall less precipitation and snowfall,” Campbell explains.

Only around 20 percent of Kabul is connected to the city’s piped water system, leaving many residents to ensure their own supply by digging wells that are often shared by several neighbours.

Others buy water from private companies, or, like Mohammad Nazir, fill up jerry cans at mosques or more than 400 public taps scattered around the city.

“There is no point turning on the taps—there is no water here,” says Nazir, 50, who lives on a hill where the ground is too hard to dig a well and the city’s pipes do not reach.

Water is not only scarce in Kabul, but most of it is undrinkable, according to the National Environmental Protection Agency.

Around 70 percent of the city’s groundwater is contaminated by waste and chemicals from leaky household septic tanks and industrial plants that can cause diarrhoea or other illnesses if the water is not boiled or purified properly.