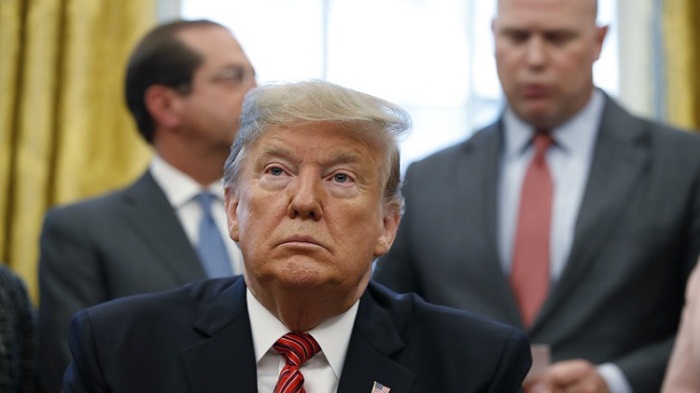 President Donald Trump is using a bill signing focused on curbing human trafficking to push his case for a wall on the US-Mexico border.

Wednesday's bill signing came a day after Trump's prime-time speech designed to persuade Americans that illegal immigration and trafficking at the border are a crisis.

The White House says it's the fourth bipartisan bill the Republican president has signed in the last few weeks to prevent human trafficking.

Congressional Democrats say they'll head to the White House with the plan to reopen the government - the same one they've been presenting. They're asking President Donald Trump to accept a bipartisan bill to fund border security without the wall.

Speaker Nancy Pelosi said Wednesday the president "could end the Trump shutdown and re-open the government today, and he should."

Pelosi and Senate Democratic leader Chuck Schumer spoke at an event where they were flanked by federal workers going without pay during the shutdown, now in its 19th day.

Schumer called workers the "collateral damage" of Trump's "temper tantrum." He said the president failed to "persuade a soul" during his "divisive" prime-time address Tuesday night to the nation.

Trump meets with congressional leaders at the White House Wednesday afternoon. He rejected the Senate's bipartisan funding bill in December, sparking the shutdown.

The White House is trying to keep jittery congressional Republicans from defecting over the toll the partial government shutdown is taking in their states.

President Donald Trump and Democrats have been at an impasse over funding for his proposed border wall, which has led to a partial government shutdown, now in its 19th day.

Trump meets with Senate Republicans Wednesday on Capitol Hill just hours after he argued on national television that a border wall was needed to resolve a security and humanitarian "crisis."

Senators say the shutdown has led to disruptions in agricultural payments for farmers, as well as for home buyers trying to secure government-backed home loans. Lawmakers also are worried about missed paychecks for government workers Friday.

As many as half a dozen GOP senators have said the government should reopen while border security negotiations with Democrats continue.

In his first national address from the Oval Office, the president gave no indication he was softening his stance that the partial government shutdown would continue without money for the wall.

Trump argued Tuesday night that the wall was needed to resolve what he called a security and humanitarian "crisis."

He addressed the nation as the shutdown stretched through its third week, with hundreds of thousands of federal workers going without pay and some congressional Republicans growing increasingly jittery about the impasse.

Trump plans to visit Senate Republicans at the Capitol on Wednesday before meeting with Democratic leaders at the White House.