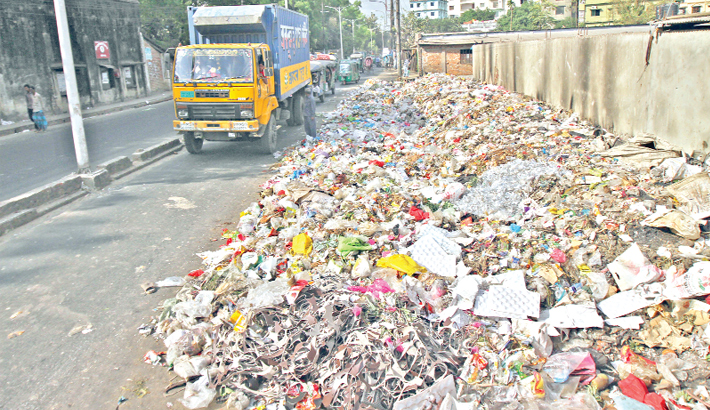 Garbage littering on a roadside has been causing immense suffering to pedestrians and residents in Aturar Depot area in the port city. — Rabin Chowdhury

Uncontrolled dumping of garbage at an open space has been causing immense suffering to pedestrians and residents in Aturar Depot area in the port city.

Garbage littering on roadside is a common scene in the area while the authority concerned is indifferent to the menace, alleged locals of the area under Ward No-7 of Chattogram City Corporation (CCC).

Vehicular movement through the busy Muradpur-Hathazari Road is also being hampered due to dumping of the garbage beside the road.

Bad odour throughout the day makes the environment difficult for the people pass through the area.

Locals alleged that they are compelled to dump the garbage mostly household ones on the open space due to lack of any temporary or permanent dustbin there.

They, however, said CCC takes away the garbage in the night hours everyday.

Contacted, CCC Chief Conservancy Officer Sheikh Shafiqul Mannan Siddiqi told the daily sun that residents of the area are forced to dump the garbage on the open space due to lack of ‘secondary centre’ where garbage is initially kept for taking to final dumping station.

He informed that they collect garbage from the spot in the every evening.

Local Ward Councillor Md Mobarak Ali informed that they have already taken an initiative to set up a secondary centre to keep garbage in the area.

He hoped that the residents will get relief of bad odour within next two to three months after setting up the garbage-centre.

Mentionable, a memorandum of understanding (MoU) was signed between the CCC and Bangladesh Power Development Board (PDB) for setting up a plant to generate power from garbage on October 21 last year.