‘Mo & the Shooting Stars’ to perform at Nat’l Museum tomorrow 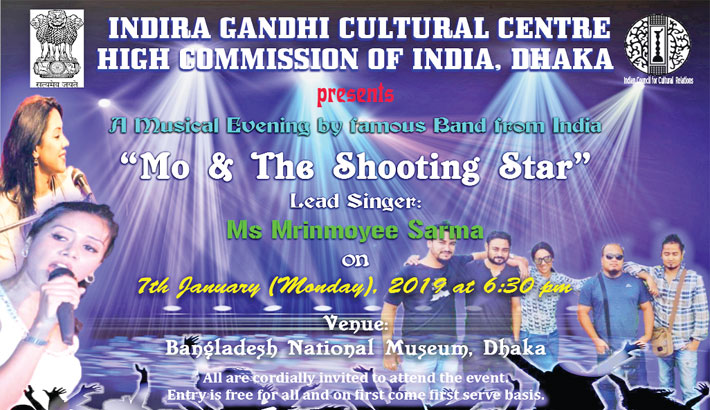 Indira Gandhi Cultural Centre, High Commission of India, Dhaka is going to organise an evening of popular music by Music band from India “Mo &The Shooting Stars” lead by Mrinmoyee Sarma at the main auditorium of Bangladesh National Museum tomorrow AT 06:30pm.

Mo & The shooting Stars is a multi genre band formed in 2014. In a short span of time they have come a long way - from opening for Smokie in Shillong to performing at numerous concerts and festivals in the country as well as internationally they have done it all. The set lists they perform consist of a variety of genre along with folk fusion that makes them so unique. They perform popular Hindi and English along with some Bangla numbers and also folk songs.

Some of their recent gigs included performing at the Hornbill festival in December 2017 and the Jaipur literature festival, Mountain Echoes Festival in Bhutan and also for NIA/FBI for their Asia Pacific Chapter at the Leela hotel in Delhi recently. They have performed for Salman Khan on 22nd November 2018 at the Menchoka Festival in Arunachal Pradesh.

All are cordially invited to attend the programme. Entry is free for all.