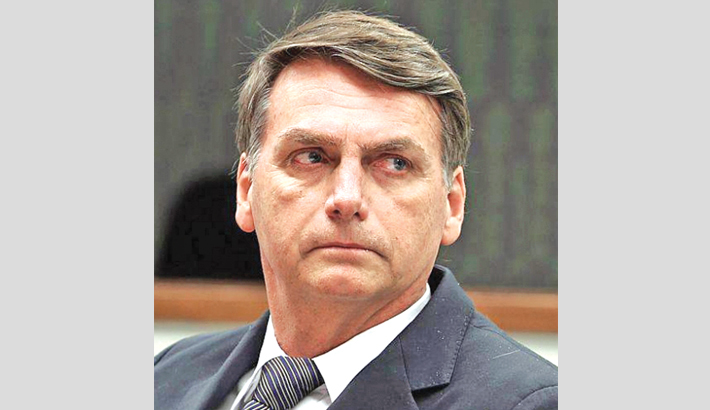 BRASÍLIA: Brazil’s President Jair Bolsonaro has confirmed he will move his country’s embassy in Israel to Jerusalem, and said the main nation objecting to that is Iran, not Arab countries, reports AFP.

Bolsonaro, speaking in an interview to SBT television late Thursday, said: “The decision is taken, it’s only a matter of when it will be implemented.”

Bolsonaro, a far-right former paratrooper intent on forging close ties with the US and Israel, signalled before taking office that he planned to follow President Donald Trump’s lead in moving Brazil’s embassy to Jerusalem.

The decision is controversial because Israel claims all of Jerusalem as its capital while Palestinians view east Jerusalem as the capital of its future state.

Virtually all countries agree that Jerusalem’s status can only be defined through wider Israeli-Palestinian peace negotiations.

So far, only the United States and Guatemala have broken with that consensus by opening embassies in Jerusalem. Paraguay backtracked on a decision last year to move its embassy. Israel and the US have spoken with Honduras about its embassy going to Jerusalem.

Bolsonaro had wavered on the embassy move after saying in early November he intended to go through with it. Days later he rowed back, saying “it is not yet decided,” apparently responding to fears of Brazil’s powerful farming businesses that an embassy move could put at risk $1 billion in meat exports to Arab markets.

But in his SBT interview, Bolsonaro minimized that risk, saying: “A large part of the Arab world is aligned or aligning itself with the United States. The Palestinian issue is already overloading people in the Arab world for the most part.”