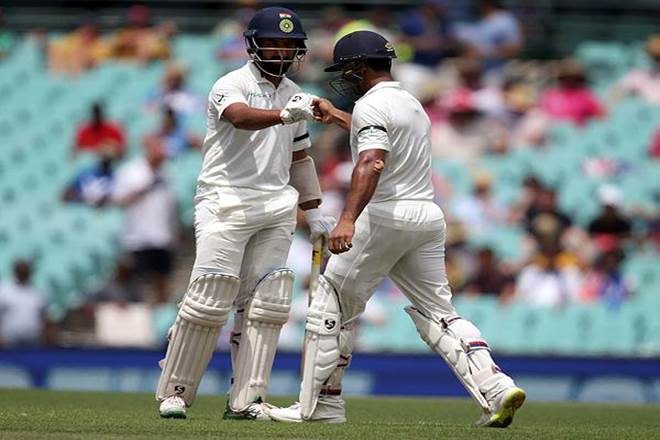 India recovered from the early loss of Lokesh Rahul to reach 69-1 at lunch on the first day of the fourth and final test against Australia at the Sydney Cricket Ground on Thursday.

After winning the toss and batting, India lost Rahul for nine in the second over of the morning to Josh Hazlewood (1-17) who teased the opener into edging through to Shaun Marsh at first slip.

Mayank Agarwal then combined with Chesteshwar Pujara to steady the tourists' innings with a 59-run partnership to see India through to lunch without further loss.

At the interval, Agarwal was unbeaten on 42 with Pujara 16 not out.

Australia thought they had Pujara caught behind off Pat Cummins at 51-1 in the 15th over, but its review was unsuccessful as the television replay review indicated the ball had flicked Pujara's trousers on the way through to wicketkeeper Tim Paine.

Both teams made two changes from the third test with India bringing in Rahul for Rohit Sharma, who is absent after the birth of his first child, and spinner Kuldeep Yadav for seamer Ishant Sharma.

Australia recalled Peter Handscomb for the out-of-sorts Aaron Finch and dropped Mitch Marsh for leg-spinning allrounder Marnus Labuschagne, who will bat at No. 3.

Kohli, a century-maker the last time India played a test at the SCG, said after winning the toss that the pitch "will be tougher to bat as the game goes on, ideal for us to bat (first)."

India, seeking its first series win in Australia, and first test victory at the SCG since 1978, leads the four-test series 2-1 after wins in the first test at Adelaide by 31 runs and last week's Boxing Day test to retain the Border-Gavaskar trophy.

Australia won the second test in Perth by 146 runs.