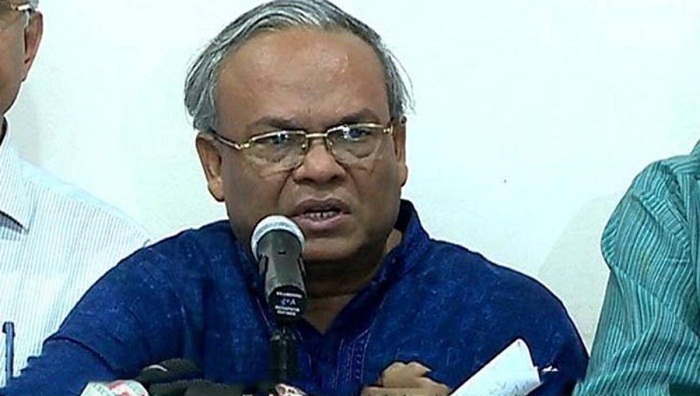 BNP on Wednesday alleged that Awami League leaders and activists are unleashing post-election violence against their opponents at different parts of the country after returning to power through “vote frauds”.

“No Awami League candidate got elected MPs this time. Rather the UNOs and OCs became the MPs in the election,” said BNP senior joint secretary general Ruhul Kabir Rizvi.

He further said, “After staging a cruel mockery in the name of election, they (AL) are now carrying out serious repression on our leaders, activists and supporters at different places. They’re attacking the houses, markets and shops, business establishments and agricultural farms and others assets of innocent people and vandalising or setting fire to those.”

The BNP leader came up with the remarks while speaking at a press conference at the party’s Nayapaltan central office.

Rizvi said their leaders and activists now cannot stay in their respective areas due to post-election violence, harassment and continued drive by police to arrest them.

About the December-30 national election, Rizvi alleged that ruling party ‘cadres’ and law enforcers indulged in ballot stuffing and election frauds on the night of December 29.

He claimed that Awami League spent huge money on law enforcers to have a ‘false victory through vote ‘rigging’. “In fact, they (law enforcers) worked as the main instrument for holding a lopsided election. Sheikh Hasina’s party didn’t win the election with people’s votes, but with the ghost ones.”

Rizvi also said the December-30 election is even worse than that of 1973 ones. “The new government under Sheikh Hasina will be a government of the BGB by the Rab and for the police.”

He strongly condemned the reported gang-rape of a woman in Noakhali's Subarnachar upazila for casting ballots for ‘Sheaf of Paddy, the electoral symbol of BNP.