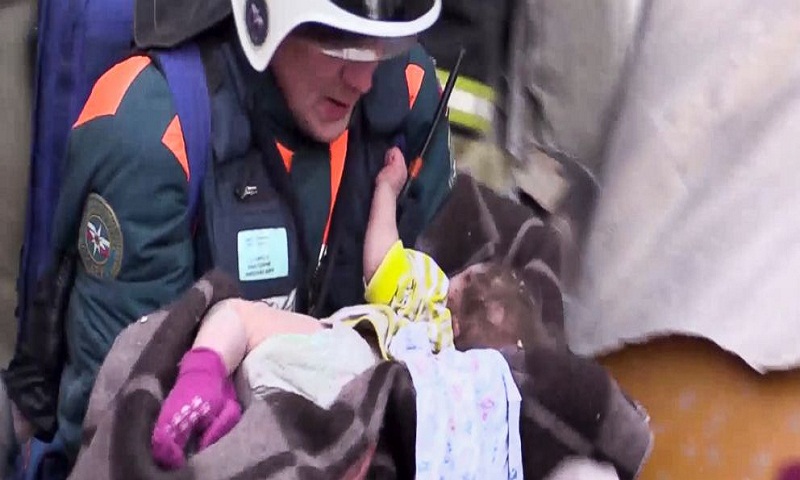 An 11-month-old boy rescued from the ruins of a collapsed apartment block in the Russian city of Magnitogorsk is said to be conscious but in an "extremely serious" condition.

The country's health ministry says he has severe frostbite to his limbs, a head injury and multiple leg fractures.

The boy, named Ivan, has been evacuated to Moscow for treatment.

Ivan was found after spending more than 30 hours in sub-zero temperatures in the rubble of the apartment block.

In another deadly incident in Magnitogorsk, an explosion in a gas-powered minibus has killed three people. Reports suggest the vehicle's fuel system blew up.

How was Ivan found?

He was found wrapped in a blanket and in his cot in the Urals region city, about 1,695km (1,053 miles) east of Moscow, where the daytime temperature is about -17C.

One rescuer, Pyotr Gritsenko has described how the infant, whom he initially thought to be a girl, was found.

"[We made sure there was] silence so we could hear if sounds were coming or not," he told Russian state TV channel Rossia 24.

"One of the rescuers in our group, Andrei Valman, heard a child crying near the adjacent apartment block, near the part that was still standing.

"After that, we stopped all our equipment in order to make sure again, and listened. When we said 'Quiet!' the baby reacted and went quiet too. When we said 'Where are you?' she started to react again.

"When we were certain, the head of our centre, who is more experienced, said 'This is where we'll work' and told us to start removing the rubble."

How great is the challenge facing the rescuers?

Authorities earlier announced they had halted their search for survivors until the unstable building could be secured.

"It's impossible to continue working in such conditions," emergencies ministry head Yevgeny Zinichev reportedly said, citing a "real threat of part of the building collapsing".

It will take about 24 hours to secure the building, the BBC's Sarah Rainsford reported at about 13:00 local time (08:00 GMT) on Tuesday.

Authorities are in a race against time to find survivors, with temperatures expected to fall further overnight.

The building was home to 120 people, and 48 flats collapsed in the blast.

"I woke up and felt myself falling," one witness told Russian television, according to news agency AFP. "The walls were gone. My mother was screaming and my son had been buried."

Another witness spoke of a "wave of fire" which followed the explosion.

Russia's Vesti news channel says more than 50 of the block's residents have been accounted for, including the victims.

The blast, at 06:02 local time is thought to have ripped through the first floor, which houses some offices, and the seven storeys above then collapsed. Nearby flats were also damaged.

A criminal investigation has been opened into the disaster.

Wednesday has been declared is a day of mourning in Magnitogorsk with flags lowered and entertainment events cancelled.