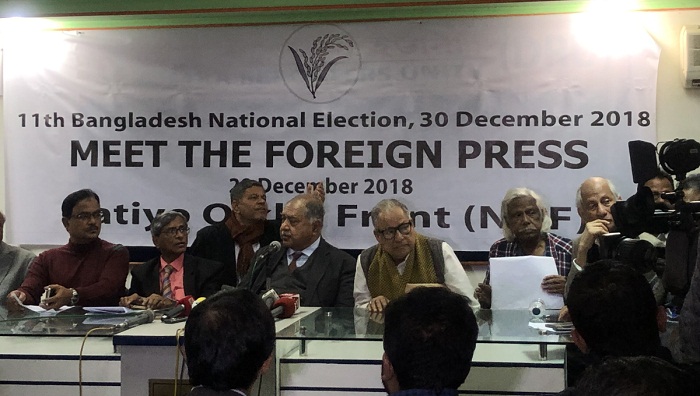 Claiming that the country’s 99 percent people want a ‘change’, Jatiya Oikya Front chief Dr Kamal Hossain on Saturday said they will vote for the coalition candidates in Sunday’s election to bring that change.

“Ninety-nine percent people are dissatisfied with the government for indulging in corruption and creating a reign of terror. Only 1 percent people might not want the change as they’re very privileged personas,” he said while briefing foreign journalists at Dhaka Reporters’ Unity about the prevailing situation across the country on the eve of the election.

Dr Kamal said, “People have got united against the government for its misrule, corruption and terrorism as they did against the Pakistan occupation forces in 1971.”

He briefly described ‘attacks’ carried out on BNP and Oikya Front candidates and their supporters and arrest by police across the country to keep them away from the election.

The Oikya Front chief claimed that reports were coming from across the country that the government has prepared ballot boxes stuffed with fake ballots to win the election.

Responding to a query, he said Oikya Front will urge the Election Commission to apply different options of the Constitution, including cancellation of the election and holding fresh voting, if the results fail to fulfill people’s expectations.