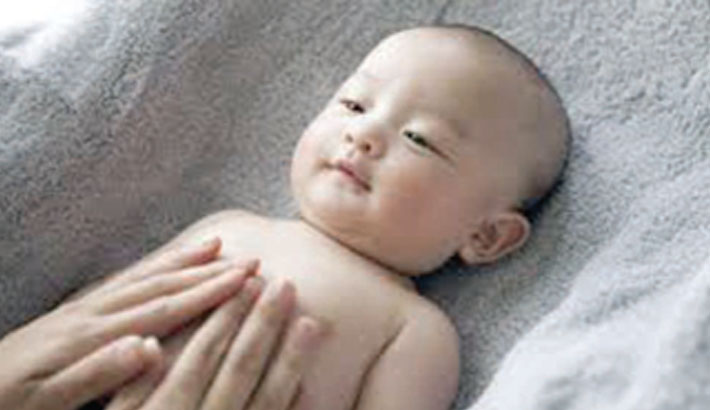 Gently stroking a baby reduces activity in their brain associated with painful experiences, a study has found, reports BBC.

The study, by University of Oxford and Liverpool John Moores University, monitored the brain activity of 32 babies while they had blood tests.  Half were stroked with a soft brush beforehand and they showed 40% less pain activity in their brain.

Author Rebeccah Slater said: “Touch seems to have analgesic potential without the risk of side-effects.” The study found that the optimal pain-reducing stroking speed was about 3cm (1in) per second.

“Parents intuitively stroke their babies at this optimal velocity,” said Prof Slater.  “If we can better understand the neurobiological underpinnings of techniques like infant massage, we can improve the advice we give to parents on how to comfort their babies.”

That speed of stroking activates a class of sensory neurons in the skin called C-tactile afferents, which have been previously been shown to reduce pain in adults.

But it had been unclear whether babies had the same response or whether it developed over time.

“There was evidence to suggest that C-tactile afferents can be activated in babies and that slow, gentle touch can evoke changes in brain activity in infants,” said Prof Slater.