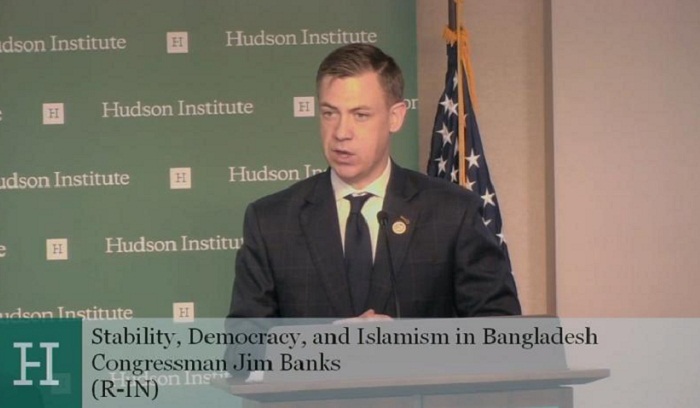 An influential US Congressman has said the United States stands with the Bangladeshi people seeking free, fair and safe democratic elections but cautioned that Islamist groups like Jamaat-e-Islami pose a great threat to the country’s democracy and progress.

“Bangladesh is a young democracy that struggles with radical groups attempting to subvert Bangladesh’s progress all while seeking political power for themselves,” Congressman Jim Banks (R-Indiana) told a discussion in Washington on Wednesday, according to a message received in Dhaka on Friday.

Hudson Institute arranged the discussion on “Stability, Democracy, and Islamism in Bangladesh”, where it convened a panel to discuss politics in Bangladesh and the country’s upcoming elections.

The congressman said Bangladesh is a booming democratic country in the South Asia region with the growing presence in the global stage. “However, Islamist groups like Jamaat-e-Islami threatened the country’s prosperity.”

In his opening remarks, Congressman Banks who recently introduced a bipartisan resolution in the House of Representatives said these violent theocratic groups have committed violent acts against religious minority Christians, Hindus, Buddhists and moderate Muslims in an attempt to silence their voices and discouraged them from participating in a democratic process.

The congressman said the United States should support the efforts of Bangladesh government to combat the radical Islamist groups and to reaffirm the rights of the religious minorities.

Banks said the resolution he introduced has called on the USAID and the US State Department to refrain from any partnership or any funding arrangement from any organizations affiliated with radical Islamist groups in Bangladesh.

He recalled that previous elections have been the breeding grounds for these violent radical groups who have committed hundreds of acts of violence against religious minorities, minority-owned businesses and houses of worships.

He said Bangladesh shares critical strategic partnership with US In July 2017, the US and Bangladesh leaders dedicated multipurpose training facilities for Bangladesh Institute for peace support training operations.

The US has provided $ 3.6million to facilitate training to peacekeepers deployed for the UN peace mission.

The congressman praised Bangladesh as one of the largest contributors of military personnel to the UN machines, playing a vital role in security cooperation.

Keeping in mind the upcoming elections in Bangladesh, Banks said in a few weeks, the world will watch the elections on December 30.

“The US stands with the people seeking free, fair and safe democratic elections and religious freedom,” he added.