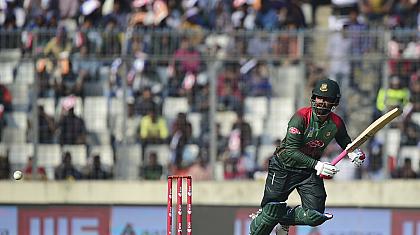 Bangladesh outplayed visiting West Indies by eight wickets in the third and final ODI of three-match series at Sylhet International Stadium on Friday to clinch the series 2-1.

Tamim Iqbal and Soumya Sarkar struck half centuries for the hosts to chase down the moderate target of 199 runs in 38.3 overs. They added 131 runs in the second wicket stand that set the platform of the Bangladesh’s stunning triumph.

While Soumya fell for a wonderful knock of 80 by 81 balls, Tamim remained unbeaten on 81 by 104 balls. Keemo Paul, the West Indies pacer, took the two wickets of the Tigers which fell in the match.

The Tigers started their innings with a solid opening stand of 45 runs by Tamim and Liton Das. Liton looked confident enough to break the bad patch he has been going through but he managed to add only 23 before falling to Keemo Paul. The right-handed batsman went to pull him but ended up with a top edge. Rovman Powell took an easy catch to end the innings of Liton.

After losing Soumya with 23 more runs requiring, Tamim and Mushfiqur Rahim finished the job in style with 69 balls remaining.

Earlier in the match, the visiting West Indies posted 198 for nine on the board thanks to an unbeaten ton (108) by Shai Hope who had also hit a century in the second match of the series in Dhaka.

The Tigers managed to restrict West Indies to 198 runs which set the platform for the hosts to win the consecutive second ODI series victory over the Caribbean boys.

In the series opener, Bangladesh beat the visiting team by five wickets. Mashrafe led the bowling side taking three scalps and Mustafizur Rahman followed him bagging another three. Mushfiqur Rahim hit a fifty later and secured a win for the hosts.

But in the second match, the Caribbean boys bounced back with a stunning win courtesy to Shai Hope’s career-best knock of unbeaten 146. Bangladesh posted 255 in the first innings of the second match which has proved to be an easy target to chase for West Indies.

Right after the ODI series, both teams will lock horns in a three-match T20I series. The first encounter of the series will take place in Sylhet on December 17 while the remaining two matches will be held in Dhaka on December 20 and 22 respectively.

While the first match will kicks off at 2pm, the others two will be held from 5pm.