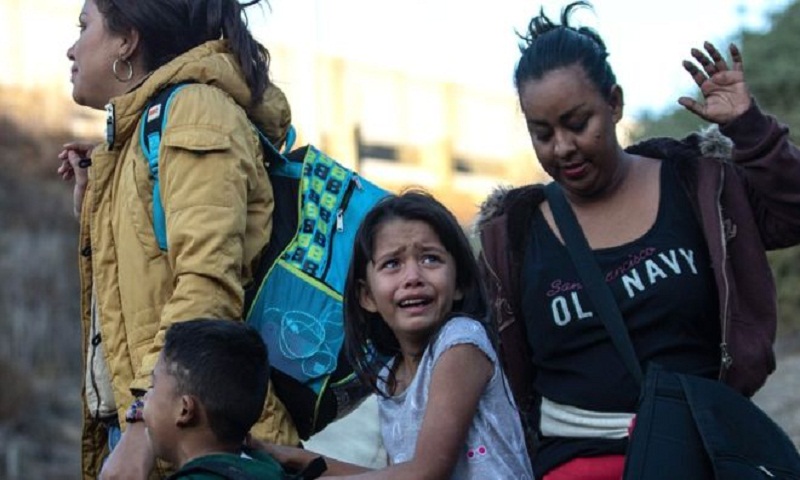 A seven-year-old girl from Guatemala who illegally crossed the US-Mexico border with her father died hours after being taken into custody, US media say.

The girl, who arrived in the US last week as part of a group of migrants, died of dehydration and shock, the Washington Post reported.

The AP news agency quotes border officials as saying she had not had food or water for several days.

Thousands of migrants have travelled from Central America to the US border.

The migrants say they are fleeing persecution, poverty and violence in their home countries of Guatemala, Honduras, and El Salvador.

Many of them say their goal is to settle in the US despite warnings by US officials that anyone found entering the country illegally will face arrest, prosecution and deportation.

US officials have so far made no official statement on the death of the girl.

On Thursday, the Washington Post reported that she had suffered seizures after being detained last weekend along with her father and was taken by helicopter to a children's hospital in El Paso.

In less than 24 hours after she was admitted, she suffered a cardiac arrest, the newspaper says, citing US Customs and Border Protection authorities.

Tension has been running high on the US-Mexican border since the arrival of almost 7,500 migrants in recent weeks.

Last month, US border agents used tear gas on a crowd of migrants, including children, trying to cross the border.

The agents said that personnel had been assaulted and hit by stones.

However, critics accused the Trump administration of a draconian response, while Mexico demanded an investigation into the incident.

The migrants have travelled in large groups, dubbed "caravans", for more than 4,000km (2,500 miles) from Central America.

Among them are many families with young children.

Donald Trump has vowed to keep each migrant on the Mexican side of the border until courts have decided their cases, meaning some face a long wait.

They have been spending time in temporary shelters in the Mexican border city of Tijuana and in Mexicali, 180km to the east.