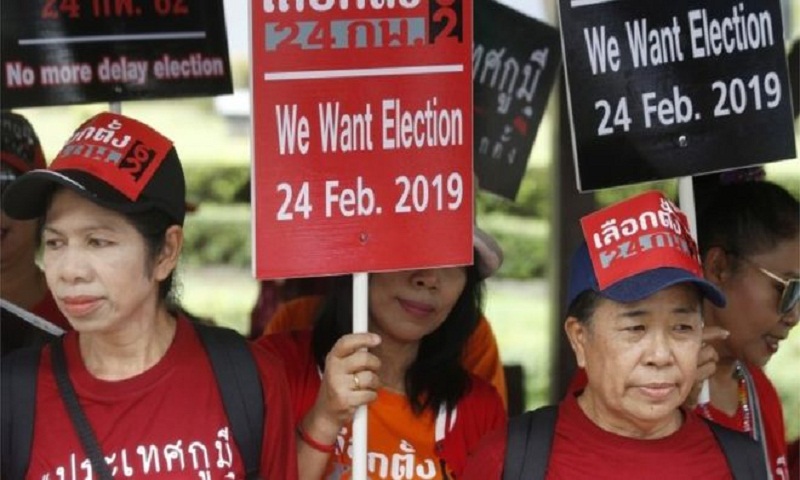 Thailand's military government has said political parties are free to start campaigning ahead of a long-awaited election scheduled for 24 February.

The announcement ends a ban on political campaigning brought in when the military ousted the elected government in a coup four years ago.

The military has always insisted it intends to restore democracy in Thailand.

But the election date has been pushed back repeatedly.

The military took power in Thailand in 2014, overthrowing the government of Prime Minister Yingluck Shinawatra and the hugely popular Pheu Thai party.

Military leaders said at the time they were restoring order after months of political unrest which had at times turned violent.

They later drew up a new constitution and changes to the electoral system, which were approved by the public in a referendum in 2017.

The constitution effectively ensures that even after the election, the military will remain an influential force in politics. It will be able to appoint the senate, which in turn will help choose the next prime minister.

Dozens of people have been detained and charged since the military banned political activity and gatherings of more than five people in an attempt to prevent more of the frequent large scale protests seen over the years.

But an announcement on Tuesday said political parties "should be able to campaign to present their policies" so the junta had "decided to amend or abolish the laws".

Thailand's military has a history of intervening in politics and has seized power 12 times since the end of the absolute monarchy - and the introduction of the first constitution - in 1932.

It has promised not to intervene after the next elections but has already delayed them several times.

The BBC's Jonathan Head in Bangkok says the new electoral system has been drawn up in a way that clearly disadvantages Pheu Thai, the strongest party in the country for two decades.

The party remains closely linked to its previous ousted leader, Thaksin Shinawatra, who lives in exile after being convicted of corruption.

Much will depend on how well popular support for the party has held up under military rule, says our correspondent.

If it does well enough in the election, it may try to form a government, despite likely resistance from the military.