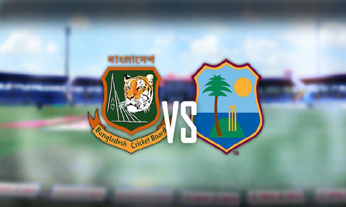 After winning the first match, motivated Bangladesh aim to wrap up the three-match ODI series with one match in hand as they face visiting West Indies in the second ODI schedule to be held tomorrow at Sher-e-Bangla National Cricket Stadium at Mirpur in the city.

The day-night match kicks off at 1 pm.

The Tigers have done excellently in all three departments over the past few weeks.

In the first ODI, Mashrafe Mortaza and Mustafizur Rahman shined with ball as the duo shared six wickets between them to restrict the visitors at below par 195.

The home side recovery from 42 for 2 was also encouraging as dependable batsman Mushfiqur Rahim provided the anchor role to take the team towards the victory after Shakib Al Hasan and Liton Das contributed a little for the side. Soumya Sarkar also struck the ball well during his short stay, before Mushfiqur and Mahmudullah took the home side towards the coast quickly.

Speedster Mashrafe Bin Mortaza became player of the match after two years in his 200 land mark match and the bowling side boosted after Mashrafe’s impressive performance taking three wickets in the first ODI.

His combination of bowling sensation Mustafizur Rahman and delicate seam movement continued to work for him in the last five years of his ODI career.

In the first match, Mushfiqur Rahim, who scored match-winning half century, moved past West Indies dashing batsman Chris Gayle as the highest run-getter in Bangladesh-West Indies ODIs. He has now scored 670 runs in 20 matches, averaging 41.87. The Tigers skipper must be expecting the same performance in the second match.

For the West Indies, their batsmen are still struggling to get form. As none of them able to score half century in the first game and failed to set up a challenging total for Bangladesh.

Though there were some encouraging signs in the practice one-dayer when they scored a 300-plus total but they couldn’t deal with the lack of pace on the ball as Shakib and Mehidy Hasan bowled during the Powerplay, and then according to Chase, also had trouble against the pacers as the innings progressed.

With an attack that boasts two genuine pacers and a bit of variety, the Caribbean side must get a 240-plus total in Dhaka to seriously challenge the hosts. Oshane Thomas and Kemar Roach can be a handful in any conditions but they need to be backed by runs.