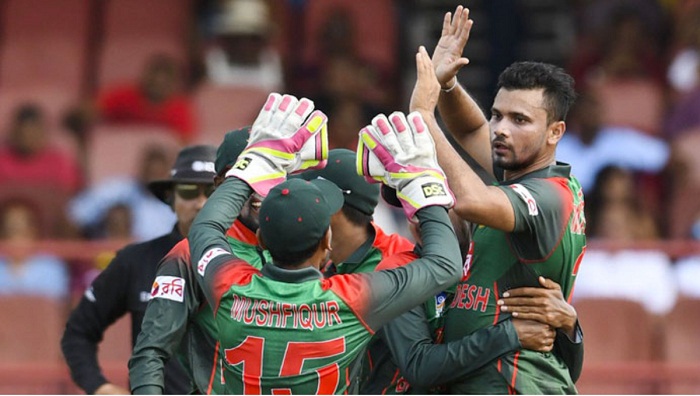 Bangladesh started the three-match series with a thumping five-wicket win over visiting West Indies on Sunday at Sher-e-Bangla National Stadium with 89 balls to play.

Mashrafe Mortaza, who played his 200th One-day International, led the Tigers to force the visitors to capitulate in 195 for nine that gave Bangladesh a clear edge to win the series opener.

While Mashrafe marked his 200th ODI with best bowling figure for the team, Mushfiqur Rahim hit a combative fifty to ensure a lead in the series.

The Tigers lost two quick wickets at the start of pursuing 196. Tamim Iqbal fell as the first man when he spooned a Roston Chase delivery to cover for an easy catch.

He failed to judge the spin and disappointed to make his comeback memorable in spite of hitting a 70-ball ton in the lone warm-up game before the series. The southpaw added 12 on the board.

Imrul Kayes indicated he is at the form of his life hitting the very first ball for a four after coming into the middle. But the left-hander got dismissed while playing his second delivery. He was beaten by the pace of Oshane Thomas. The 21-year-old left-arm pacer ended the golden run of Imrul who struck two centuries for Bangladesh in the Zimbabwe series.

After losing two wickets in two successive overs, Liton Das who survived for a no-ball of Kemar Roach, and Mushfiqur Rahim added 47 at the third wicket stand. Liton fell to a wonderful delivery of Keemo Paul who uprooted the off-stump of the right-hander. Liton went across and tried to hit towards midwicket but he could not make it.

In the fourth wicket stand, Mushfiqur Rahim and Shakib Al Hasan added 57 runs that broke with Shakib’s dismissal. The Bangladesh Test captain stepped down to face a good length delivery of Rovman Powell and ended with a failed attempt. The ball passed him after nicking his bat, and Shai hope grabbed the catch behind the wicket.

Soumya fell at the time when the Tigers needed 21 to win. The southpaw hit a watchful century in the lone 50-over practice game prior to the series but disappointed the fans this time. Despite playing some sparkling shots, he got dismissed while clearing Roston Chase towards the point. He mistimed and got caught at first slip.

Mushfiqur and Mahmudullah left the field after ensuring the victory in the first match of the series. Mushfiq remained unbeaten on 55 which is his 31st ODI fifty.

Roston Chase took two wickets for the visitors but his effort was not enough to avoid a defeat. In the last series when both teams tested their One-day strength, Bangladesh came up as victorious. Now they have the chance to beat West Indies in successive two One-day International series.

Earlier, Mashrafe Mortaza led the Tigers’ bowling arsenal taking three scalps for 30 runs in 10 overs. Mustafizur gave him a perfect company taking three more wickets for 35 runs. The pacer-duo prevented the Caribbeans to get settled in the middle. The tourists managed a sub-par total of 195 for nine that eventually has proved to be an easy-to-chase target for Bangladesh.

Later, Mashrafe was adjudged the man of the match.

Shai Hope was the only West Indies batsman who passed the 40-run mark. The others were clueless to bat on the typical Dhaka wicket.

The second and third encounter of the series will take place on December 11 and 14 respectively. While the first one will be held in Sher-e-Bangla National Stadium, the remaining one will be played in Sylhet International Stadium.