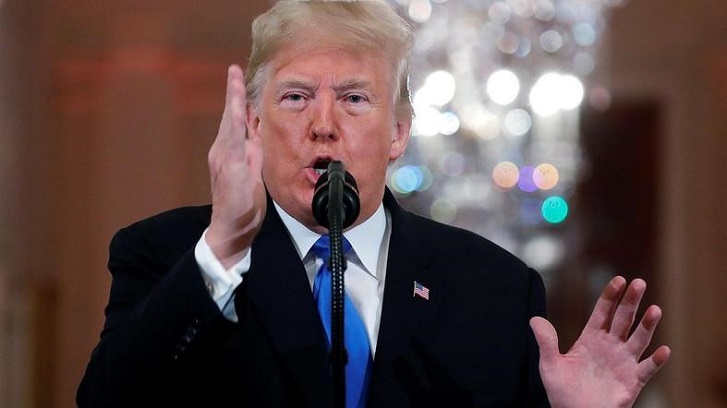 US President Donald Trump on Saturday once again attacked the Paris agreement on fighting climate change, citing ongoing protests in the French capital as proof that he was right to reject the pact.

His tweets came in the middle of UN climate talks in Poland, where nearly 200 nations have gathered to agree on a universal rulebook to make good on promises they signed up to in the 2015 Paris climate deal to cap global warming at well under two degrees Celsius (3.6 Fahrenheit).

"Very sad day & night in Paris," he said on Twitter, after demonstrators clashed with riot police in the French capital.

"Maybe it's time to end the ridiculous and extremely expensive Paris Agreement and return money back to the people in the form of lower taxes? The U.S. was way ahead of the curve on that and the only major country where emissions went down last year!"

Trump's comments were not the first time he had used the "yellow vest" protests -- which began on November 17 with road blockades against fuel prices but have since ballooned into a mass movement against French President Emmanuel Macron -- to criticize the climate deal.

On Tuesday, he called the Paris agreement "fatally flawed" and said Macron's decision to suspend the fuel tax hikes vindicated his decision to dump the climate deal.

Trump has long said he distrusts the consensus by nearly all the world's respected climate scientists on the link between human activity and rising temperatures, as well as other damaging climate change phenomena.

Since becoming president in January 2017, he has pulled the United States out of the Paris Agreement and torn up a raft of environmental protection laws, saying the US economy needs the boost.

Last month, Trump said he didn't believe the central warning in his own government's National Climate Assessment, which said there will be hundreds of billions of dollars in losses by the end of the century due to climate change "without substantial and sustained global mitigation."

The UN's independent panel of climate experts in October issued its starkest findings yet: emissions from fossil fuels must be slashed by half within 12 years in order to hit the Paris goals of limited temperature rises.

Air pollution alone is now estimated to kill as many as nine million people every year.

"The Paris Agreement isn't working out so well for Paris. Protests and riots all over France," Trump said earlier Saturday.

"People do not want to pay large sums of money, much to third world countries (that are questionably run), in order to maybe protect the environment."