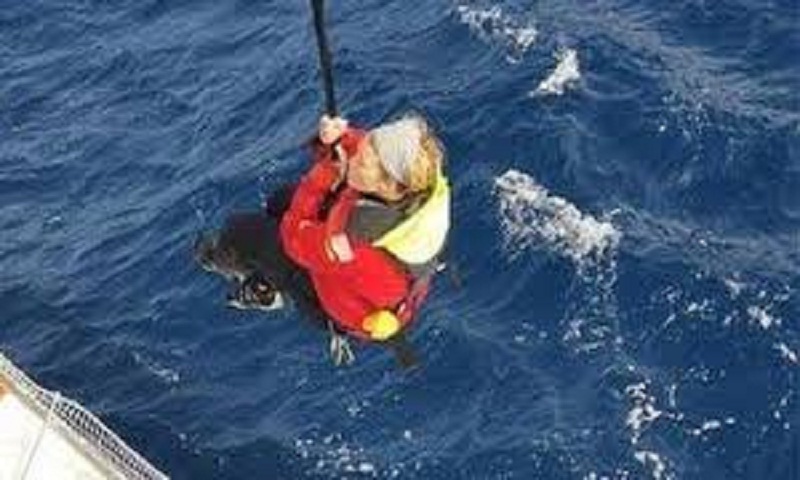 English yachtswoman Susie Goodall has been rescued by a 40,000-tonne cargo ship in stormy conditions - two days after her boat violently capsized 2,000 miles west of Cape Horn during the Golden Globe Race.

The 119-metre cargo ship had to use its crane to lift Goodall onboard.

The 29-year-old lost her mast after her boat pitchpoled during the non-stop solo round-the-world race.

The Chilean Maritime Rescue Coordination Centre later tweeted a picture of Goodall being rescued, adding: "After three intensive days of co-ordinations from MRCC Chile, today at 15:35, the motor vessel Tian Fu was able to rescue the British yachtswoman Susie Goodall."

Goodall, the youngest competitor in the race, said waves in the southern Pacific Ocean were about three to four metres high before the rescue mission.

Conditions were considered too difficult to launch a rib-boat from the Tian Fu, which was diverted to rescue her during its voyage from China to Argentina.

With her mast-less boat pitching up and down in the waves, the plan was for Goodall to manoeuvre her DHL Starlight vessel alongside the moving cargo ship and use a harness to attach herself to a swinging hook.

But after her boat's engine stopped, the Tian Fu's captain had to move his ship to meet Goodall.

Goodall was in fourth place when her boat capsized in 30-35 knot winds, following a failure in the automatic steering system.

The pitchpole - rolling end over end - was so violent she was knocked out.

When she came to, she raised the distress signal, which was first picked up by Falmouth Coastguards.

She then tweeted to say she was "totally and utterly gutted", and has since been seasick because of the mast-less boat pitching in the waves.

McIntyre said: "She was in shock and during a dramatic phone call didn't want to abandon the boat. But we had to make her realise it was more serious than she thought."