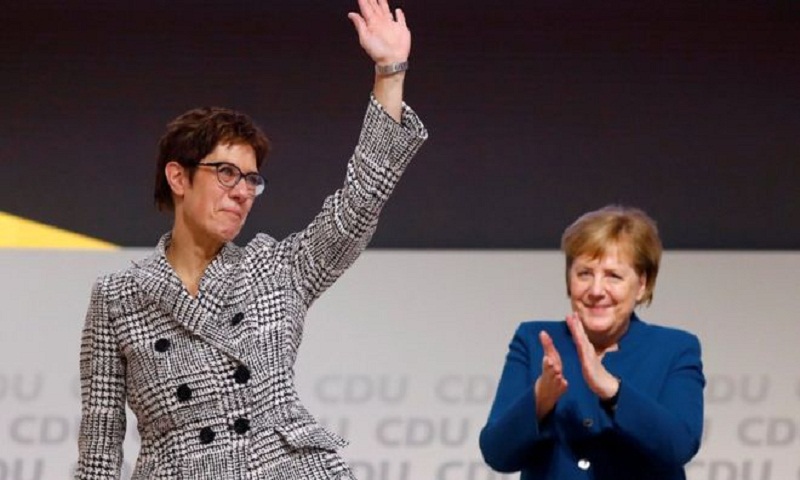 Ms Kramp-Karrenbauer, or AKK as she is also known, received 517 of 999 votes.

Mrs Merkel, who plans to serve out her term as chancellor until 2021, gave an emotional farewell speech on Friday at the special party conference.

As the head of Germany's largest party, Ms Kramp-Karrenbauer could now become the next German chancellor.

The former prime minister of the state of Saarland said: "I learned what it is to lead, and above all learnt that leadership is more about being strong on the inside than being loud on the outside."

She called for party unity in her first address as leader and brought Mr Merz and her other opponent, Health Minister Jens Spahn, to the stage, saying she would be "very happy" if they joined her in this task.

The 56-year-old was the favourite for party leader and Ms Merkel's choice to succeed her.

Earlier, during her farewell speech as party leader, Ms Merkel praised AKK for her 2017 electoral success in Saarland, in a clear hint of the chancellor's personal preference.

Popular in her home state of Saarland and Berlin, she has an unpretentious style and a reputation for calm analysis, as well as political acumen.

Ms Kramp-Karrenbauer joined the CDU as a student in 1981 and rose up the ranks of state-level politics. The devout Catholic was seen as Ms Merkel's heir apparent and protégé.

She is a Merkel loyalist, perceived as someone who will replicate much of the chancellor's style and policy.

However she has differentiated herself from her mentor, voting in favour of quotas for women on corporate boards and taking a tougher line on Russia.

She is also more conservative on social issues such as gay marriage, and has vowed to review the country's position on security and migration.