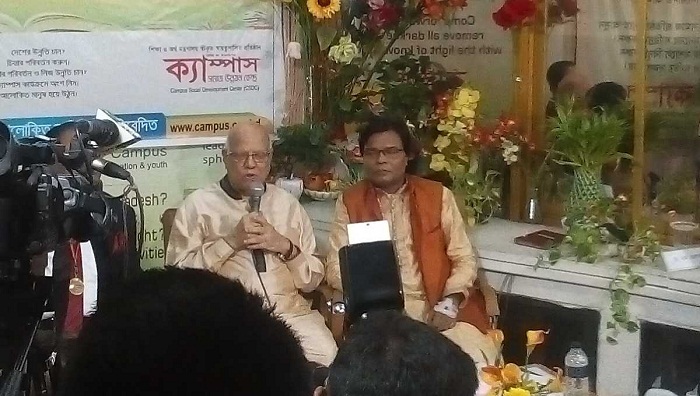 Finance Minister AMA Muhith on Friday said the Awami League-led government will roll out a budget of around TK one million crore if comes to power again.

“We are thinking to announce Taka 10 lakh crore budget if will come to power again,” said the senior minister while addressing an award giving ceremony titled “Jugsrestha Shikkhauddokta  Sornapodok o Sommanona” organised by Campus Social Development Center (CSDC) at its office in the city on Friday.

The country’s development is being continued now, said the minister adding, “The construction of the much-talked about Padma Bridge will be completed by June 2019 and the country’s people will be able to commute through it from July.”

During observing the 36th anniversary of CSDC, the organisation awarded gold medal to former communications minister Syed Abul Hossain for his outstanding contribution to education sector.

AMA Muhith also said, “We have initiated 10 mega projects and expecting to implement these projects soon.”

He also claimed that his government has strengthened the country’s economy. “We are making Padma Bridge with our own funds. Syed Abul Hossain had to resign from his ministry following a ‘nonsense’ allegation of corruption of the World Bank officials.”

Some corruption might have been occurred in the lower level, but it could not reach up to his level, the minister added.

“Abul Hossain had vast contribution to the development of the country’s education sector. So, he is being honored,” he also said.

“I set up six colleges with my own funding. Of them, four are university colleges. Besides, I have founded hundreds of secondary and primary schools. Of them, around 100 primary schools have already been nationalised,” he added.

Dr M Helal, Secretary General of CSDC, said they would like to initiate various social activities for the sake of the country’s people.  “We are now trying to set up a research center in Dhaka.”