AL candidates to get final nominations by Friday: Quader 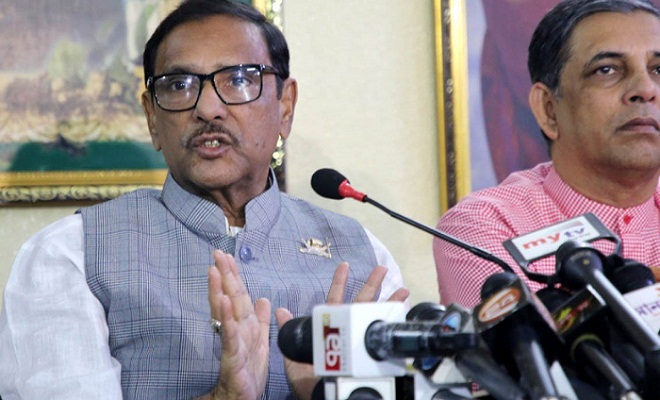 The AL leader revealed this while speaking at a joint meeting of Awami Swechasebak League, AL city north and south units at the temporary office of AL south city unit in the capital.

“The party started distributing the confirmation letters of Awami League candidates to contest in the 11th parliamentary election today and it will continue till Friday,” Quader said.

Quader, also the road transport and bridges minister, said Awami League has been in power for a long time and it has many candidates.

“So, it is very much difficult to scrutinize the party candidates. But now the nomination process has been completed easily on the basis of the survey reports under the supervision of Prime Minister Sheikh Hasina,” he added.

He said, “It was a big challenge for us to complete the nomination process of the party and the alliance. We faced the challenge successfully under the dynamic leadership of Awami League President and Prime Minister Sheikh Hasina.”

The AL general secretary said, “We conducted the survey not only on our party aspirants, but also on the candidates of BNP and other parties. So, we know about the present situations of the other parties. The parliamentary board has nominated the Awami League candidates after considering all aspects.”

Quader said, “We have already reached an understanding with our alliances. They have no complaint over the nominations. We talked with them several times.”

He said most of the party candidates are politicians while 16 to 17 are businessmen, 37 to 38 are freedom fighters and 50 candidates are new comers who were Chhatra League leaders in student life.