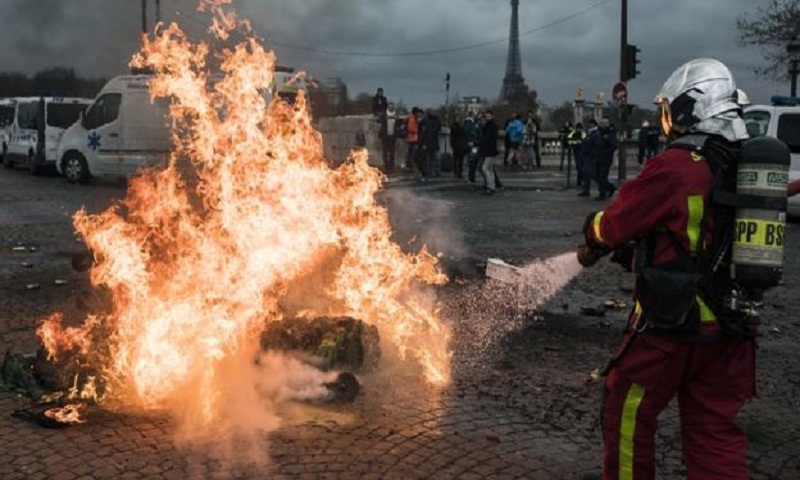 Protesters from France's "gilet jaunes" (yellow vests) movement have pulled out of a meeting with PM Edouard Philippe scheduled for Tuesday.

Some members of the group said they had received death threats from hardline protesters warning them not to enter into negotiations with the government.

The "yellow vests" have been protesting about a controversial fuel tax since mid-November.

But the protests now reflect more widespread anger at the government.

Three people have died since the unrest began and the resulting violence and vandalism - notably when statues were smashed at the Arc de Triomphe last Saturday - have been widely condemned.

"Yellow-vests" are so called because they have taken to the streets wearing the high-visibility yellow clothing that is required to be carried in every vehicle by French law.

The movement has grown via social media and has supporters across the political spectrum.

President Emmanuel Macron has accused his political opponents of hijacking the movement in order to block his reform programme.

How has the government responded?

The French president held an urgent security meeting on Monday. Ministers said that while no options had been ruled out, imposing a state of emergency had not been discussed during the talks.

Mr Macron has also cancelled a planned trip to Serbia to concentrate on the crisis.

Mr Philippe also spoke with leaders of the opposition on Monday.

Far-right leader Marine Le Pen, who was at the meeting, warned that Mr Macron could become the first president to give the order to open fire on his own people in 50 years.

Some retailers had seen sales drop by around 20-40% during the demonstrations, while some restaurants had lost 20-50% of their takings, he added.

Who are the protesters?

The "gilets jaunes" movement began as a protest against a rise in duties on diesel - which is widely used by French motorists and has long been less heavily taxed than other types of fuel.

Mr Macron says his motivation for the increase is environmental, but protesters call him out of touch - particularly with non-city dwellers who rely on their cars.

The movement later grew to reflect a range of grievances, including the marginalisation of rural areas, high living costs, and general anger at President Macron's economic policies.

The protests have no identifiable leadership and gained momentum via social media, encompassing a whole range of participants from the anarchist far left to the nationalist far right, and plenty of moderates in between.

Protests continued into Monday. About 50 "yellow vests" blocked access to a major fuel depot in the port of Fos-sur-Mer, near Marseille, and petrol stations across the country have run out of fuel.

Students in about 100 secondary schools across the country held demonstrations against educational and exam reforms.

Also on Monday, French private ambulance drivers staged further demonstrations against a range of social security and healthcare reforms they say could affect their services.

One protester told the Reuters news agency: "[The reforms] will bludgeon us financially and destroy our companies. We're going to have to fire people, that's for sure."

It is unclear whether the groups of students and health workers have directly aligned themselves with the "yellow vests".

One member of the movement, a man in his 20s, is in a critical condition in hospital in Toulouse.

He was injured in a clash with police.